The owners of a Hollywood Boulevard nightclub are facing criminal charges for alleged after-hours alcohol sales, over-serving customers and having a lack of security at the venue.

Los Angeles City Attorney Mike Feuer announced on Feb. 15 that 40 criminal charges were filed against the owners and operators of Playhouse Nightclub, located at 6506 Hollywood Blvd. The announcement follows multi-agency inspections by the California Department of Alcoholic Beverage Control, Los Angeles Department of Building and Safety, Los Angeles Planning Department and Los Angeles Police Department during the past 10 months. 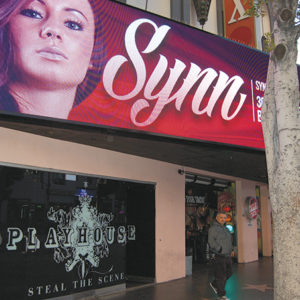 The Los Angeles City Attorney’s Office has filed numerous charges against the owner of Playhouse Nightclub on Hollywood Boulevard alleging repeated violations such as overserving patrons, selling alcohol after hours and failing to provide security. (photo by Edwin Folven)

“This latest case is part of our continuing efforts to crack down on allegedly problem nightclubs and the threat they pose to public safety,” Feuer said. “The public should know we are on it, and nightclub and bar operators should know that if they don’t follow the laws, my partners and I will take action.”

A shooting in which a patron sustained a leg wound occurred outside Playhouse during the early morning hours of Jan. 1, 2018. Officers entered the nightclub to investigate and allegedly discovered patrons still being served alcohol at approximately 2:45 a.m. During seven subsequent inspections, officers documented numerous alleged permit and Penal Code violations.

Authorities repeatedly warned the owner that he allegedly failed to have legally mandated security guards, failed to keep unguarded doors shut and locked, and continued to serve obviously intoxicated patrons who were over the legal limit for alcohol. Despite persistent warnings, the violations persisted, Feuer said.

The investigation continued until Oct. 25, when officers observed an underage female patron leaving the club and later found her to be in possession of an unregistered firearm.

Seven counts arise from the alleged failure to provide adequate security and follow proper security procedures. The location, including an adjoining parking lot, has been the site of frequent thefts, an armed robbery and numerous assaults, including an Oct. 7 brawl involving approximately 20 intoxicated patrons.

Six counts arise from allegedly serving drinks to patrons who were visibly intoxicated, in some cases having blood alcohol levels of over two and a half times the legal limit. Between May and October of 2018, three women reported being victims of alcohol-induced sexual assault, and one woman was 20 years old at the time of the alleged attack.

Two counts stem from allegedly failing to keep an unsecured back door shut and locked and one count alleges a minor was allowed on the premises. In the incident in which a minor was found to be in possession of a firearm, she was observed using an unsecured door, thereby avoiding security, which would have theoretically prevented her entry.

Vinokur faces more than two and a half years in jail, as well as thousands of dollars in fines if convicted. An arraignment is scheduled on March 1.

In 2016, the Los Angeles City Attorney’s Office filed two cases against owner Robert Vinokur for similar violations at the same location. On Sept. 7, 2016, he pleaded guilty and was placed on formal diversion stipulating the case would be dismissed if he complied with the law for 12 months. During the diversion period, no new complaints were submitted to the city attorney’s office, and on Sept. 7, 2017, the case was dismissed.