Buddhist imagery and figures on view at Japan Foundation 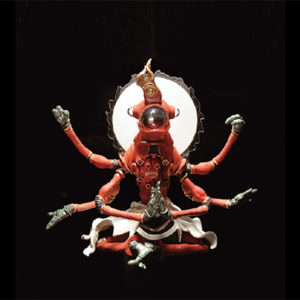 When Kamine first encountered the images of Buddhist guardian deities as a child, he was filled with awe and fear. As a working artist now, Kamine has crystallized those initial emotions into figures which borrow elements from Japanese animation and comics. They are not devotional pieces, nor are they facsimiles of extant Buddhist iconography; rather, Kamine’s exhaustive studies of Buddhist scriptures and fascination with robotic protectors, such as gundams, informed these deeply personal iterations.

The exhibition will feature a selection of Kamine’s sculptures, including representations of the Five Great Wisdom Kings.

The Japan Foundation is located at 5700 Wilshire Blvd., Ste. 100. For information, visit jflalc.org.