Beverly Hills tobacco sales could go up in smoke 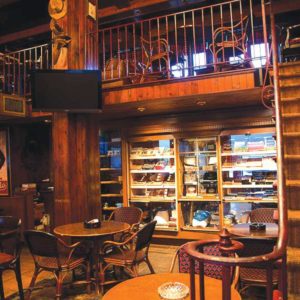 The Buena Vista Cigar Club, a popular hangout for residents and visitors in Beverly Hills, is one of almost 30 businesses that will be impacted by a potential law to ban tobacco sales. (photo courtesy of the Beverly Hills Conference and Visitors Bureau )

“It will force us out of business,” said Fernandez, one of several local store owners who addressed the City Council. Referring to his family, including sons age 21 and 16, he added, “It will force us to fight for our lives one way or another.”

Tuesday’s meeting was the first step in a potential first-of-its-kind law in the U.S. that adds to Beverly Hills’ already strict regulations for smokers.

Concerns of businesses that rely on tobacco sales will be vetted in the months ahead. The proposed law will be reviewed by the city’s Health and Safety Commission. Todd Johnson, president and CEO of the Beverly Hills Chamber of Commerce, said the chamber doesn’t have a stance on the proposed law, but it wants to be part of the decision making.

“We’re certainly cognizant of the business impact,” he said.

Julie Wagner, CEO of the Beverly Hills Conference and Visitors Bureau, said hotels are concerned the law would repel visitors, many of whom come from other countries where tobacco usage is more commonplace. The city’s hotels don’t allow smoking in any of its rooms, but guests can smoke on balconies and buy tobacco products in gift shops.

“Tourism is an important part of what our city does and we want to make sure to consider that,” Wagner said.

The list of smoking regulations already in effect in Beverly Hills includes prohibitions on smoking on public rights of way or within 20 feet of open air dining areas, unless actively passing by; a ban on smoking in multiunit housing; and a ban on flavored tobacco that has been popular among teenagers.

“Big tobacco companies are not going to give up on a teenage market that can be persuaded to buy tobacco so easily,” said Sophia Cohen, a student in Beverly Hills High School’s Medical Science Academy.

Speaking against the proposed law, Jaime Rojas, from the National Association of Tobacco Outlets, said Beverly Hills would likely face lawsuits if the law is approved.

“Our community is concerned with one’s individual health and we are going to do something about it,” Councilman Les Friedman said.

According to data from the Centers for Disease Control and Prevention, 40,000 adults in California die every year from smoking-related illnesses, and health care costs due to smoking exceeded $13 billion in 2009.

Vice Mayor John Mirisch, who has expressed support for a citywide tobacco ban in recent years, said he wanted to see the law passed within three months. But Mayor Julian Gold, who also supports the ban, said the city government needs to take the time to study the impact it would have. According to city staff, no community meetings have been held, and the city has not gathered much feedback from the business community to date.

“The elements of this are, I think, complex,” Gold said.

Los Angeles City Hall to scrutinize ties to the NRA