After hours of deliberating over a new rent stabilization provisions at their Feb. 5 meeting, Beverly Hills City Council members agreed that there are still a wide range of issues to be resolved before voting on them. 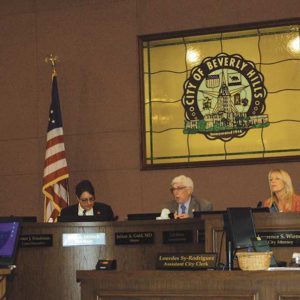 The City Council has been working on a Rent Stabilization Ordinance since 2017, when an urgency ordinance was passed. (photo by Edwin Folven)

The council will again consider the Rent Stabilization Ordinance on March 5, and will soon vote on an ordinance to formally establish a Rent Stabilization Commission to assist with the process. The five-member Rent Stabilization Commission, to be appointed by the City Council, will comprise two landlords, two tenants and one city resident who is not a landlord, tenant or building manager. Council members then will release applications, and said they hope members of the commission can help achieve a consensus on some of the more divisive issues, such as rent increases and just cause evictions.

“You are looking for people who are … willing work together,” Councilman Lili Bosse said.

Under the terms being considered, allowable rent increases would be tied to the consumer price index, with a floor of 3.5 percent and cap of 7.5 percent. Other issues the council will look into include rent subsidies for those who qualify, exemptions for luxury units, and habitability standards.

“If you want to increase the rent there should be a standard,” Beverly Hills resident Gwen Owens said. “Why should landlords increase rent if they’re not putting money into the property.”

“There are going to be unintended consequences and it’s something were going to have to deal with as they come up,” Councilman Les Friedman said.

The effort to develop a more comprehensive Rent Stabilization Ordinance has been underway for nearly two years, since the council adopted an urgency ordinance in February 2017 to limit annual rent increases and to create a rental registry. Landlords and tenants have been trying to come to terms on long-term rent stabilization provisions ever since.

Hearing stories of residents who said they are vulnerable to being priced out of Beverly Hills if they receive no-cause evictions, council members unanimously approved an urgency ordinance that eliminated landlords’ ability to evict tenants without cause during an Oct. 18 meeting.

The City Council unanimously voted at its Nov. 6 meeting to add a provision that will allow landlords the “just cause eviction of a disruptive tenant.”

“We want peace between our landlords and our tenants,” Beverly Hills resident Kathryn Jacoby said at this week’s council meeting. “Let’s work toward that and continue with more meetings.”

Los Angeles City Hall to scrutinize ties to the NRA