Avoid the awards allure of ‘A Star is Born’

“A Star is Born” is this season’s “La La Land,” a mostly well-crafted flick that goes down easy. And like “La La,” this year’s musical with a dash of realism will not be remembered, no matter how much it desires to turn filmgoers’ gaze on the inner struggles of celebrity. 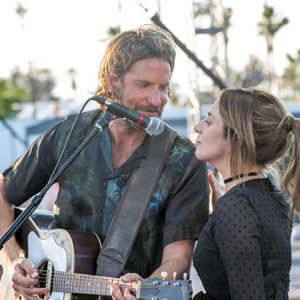 Bradley Cooper stars as Jack and Lady Gaga appears as Ally in “A Star is Born,” a contender for Best Picture at this Sunday’s Academy Awards. (photo courtesy of Warner Bros. Pictures)

Certainly, as Bradley Cooper’s directorial debut, it outshines other filmmakers’ first dips, but as the fourth version of a story dating back to 1937, an homage to country music and pop stardom is hardly fresh.

Still, the music is incredible, and Lady Gaga proves she belongs in front of a camera, not just in our headphones. And Cooper’s chops ain’t so bad either. More than anything else, “Star” ascends for the music montages.

It’s a familiar story, and not just as a remake. Jack Maine (Cooper) is a god of country music, but a drinking problem and deteriorating hearing reveal a tired soul, one prone to outburst and generosity. Enter Ally (Gaga), a fresh talent with a terrible day job. But she shines as a performer at a local drag bar – a head nod to Lady Gaga’s roots – Jack happens upon. Our country boy sees something in her and does what he can to make her a star. It works. She’s huge.

Like T-Swift before, Ally quickly evolves past those twangy roots and enters the pop scene with full force. Jack might shower her with compliments and encouragement, but his disease slowly (well, not really) affects their relationship and Ally’s professional prospects.

“Star” functions as a vehicle for both Cooper and Gaga’s performances and a purchase-worthy soundtrack, including a nominated song written and performed by the Gags herself. And to the screenwriters’ credit, the story progresses wonderfully, and everything wraps up with a one-two punch to the tear ducts. The film’s brave enough to accomplish its goals without a clean conclusion that explains everything. 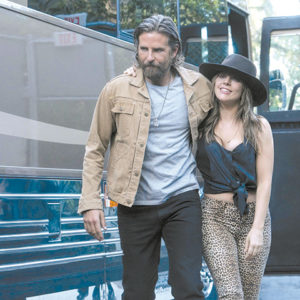 Bradley Cooper and Lady Gaga give compelling performances in “A Star is Born,” a film that is entertaining but doesn’t rise to the level of being the best of the year. (photo courtesy of Warner Bros. Pictures)

Next to the other contenders for top honors this awards season, “Star” surpasses the mediocre noms like “Bohemian Rhapsody” and the far-too juvenile “Green Book,” ranking somewhere in the middle. And that’s a huge win for a film we didn’t need and shouldn’t work at all. Again, fourth remake here. Several new additions to the story, including an extended cameo by Dave Chappelle, as Jack’s friend Noodles, enliven replicated material to a degree. But the praise must stop there.

Frankly, “A Star is Born” should walk away with at most one win for original song. It would certainly be an obvious choice, not necessarily daring though. On other awards, Gaga proves she can perform, but this is not the making of the top performance of the year. The character feels like an empty vessel on many points, never quite figuring out her purpose beyond the stage. She’s a newborn film star, following a successful run on FX’s “American Horror Story,” and that should be enough.

As for Cooper, well, he practiced his mumbling in “American Sniper” already, so a win for this seems a bit dated, especially when the chemistry between Jack and Ally never entirely works. And the other awards, from best pic to sound editing to Sam Elliott for supporting, are lip service.

This all should not undermine the quality of “A Star is Born” but place it in a broader perspective. For all its delightful and emotionally jolting moments, it might be time for the best pic category to move beyond such self-indulgent stories. Enjoyable, competent filmmaking should no longer be the golden standard for best of the year.