Art Los Angeles Contemporary welcomed over 15,000 international visitors to its 10th anniversary edition, which took place over five days from Feb. 13 to 17 at the historic Barker Hangar in Santa Monica. 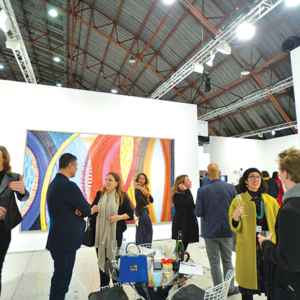 This fair, which has been a vital contributor in establishing Los Angeles as a major art city, presented more than 100 exhibitors from 19 countries and expanded its footprint with a new architectural design by Seattle-based firm Olson Kundig and a new visual identity by Willo Perron & Associates. The fair also added a new salon and publishing sections.

“Over the past decade, we have helped expand a dynamic and vital collector base that has contributed to the growth of the city as a major international art center,” said Tim Fleming, founder and director of ALAC.

Collector and art patron Beth DeWoody said ALAC, which she’s attended for the past six years, has galvanized the Los Angeles collector community.

“Its ever-evolving and fresh presentation of international work has made it a must go-to fair for me,” DeWoody said.

The Barker Hangar is located at 3021 Airport Ave. For information, visit artlosangelesfair.com.