With the administration of President Donald Trump pushing back on those who want to claim asylum in the United States, thousands of people seeking to enter the country have been forced to wait in Mexico. 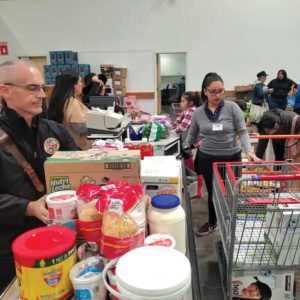 Advocacy groups like the American Civil Liberties Union and Southern Poverty Law Center have sued the administration for the crackdown on asylum seekers, but local leaders are fighting Trump as well.

O’Farrell said the Trump administration, which he accused of using racist language to describe asylum seekers, has slowed the number of hearings for people looking for refuge in the U.S. from several hundred hearings per day down to approximately 30.

In the meantime, the asylum seekers are living in shelters, some of which are overcrowded and lack necessities like hot water and working refrigerators to store food, O’Farrell said.

“Because of the backlog, there are more people who are kept in deplorable conditions and the service providers need all the help they can get,” O’Farrell said.

In a statement, Price said people hoping for asylum are suffering “unimaginable injustices and indignities.”

“People’s lives are on the line, and this is not the time to do nothing … Inaction is complicity. Inaction is inhumane,” he said.

Martha Arevalo, executive director of CARECEN-LA, said in a statement her group and the rest of the coalition were there to help a “growing refugee crisis.”

“As governments turn their backs on people fleeing violence [and] persecution, we must ensure that our community responds with solidarity and compassion,” she said.

O’Farrell said the delegation visited eight shelters, some of which lacked basics like glass in the windows to protect people from chilly nights.

“It’s cold in Tijuana. At night, when the wind blows through, all they have are blankets and mats on the floor so they can sleep,” O’Farrell said.

On the trip, the aid groups bought food, clothes, supplies and kitchen equipment for the shelters and the asylum seekers they house. O’Farrell said he personally bought a refrigerator for a shelter that lacked one and a stove for a safe house for LGBTQ people, who often face prejudice and bias on their journey to the U.S.

“Anything we can do to make life a little more tolerable,” he said.

Even though many asylum seekers are running from struggles beyond anything experienced by the average American, including abject poverty, persecution and unstable governments, O’Farrell said he saw signs of hope.

“Everywhere we went, virtually everyone we met still had a little bit of sparkle and even joy exhibited by their spirit of hopefulness. I think that’s really impressive,” O’Farrell said.

O’Farrell also encouraged Angelenos and all Americans to do what they can to help asylum seekers.

“Everyone can contribute, if they can’t get down there in person themselves, they can contribute to the nonprofits that are providing services that are helping people who are in these circumstances,” O’Farrell said.