Family, friends and civic leaders are mourning Barbara Edelston Yaroslavsky, who died on Dec. 26 at age 71. 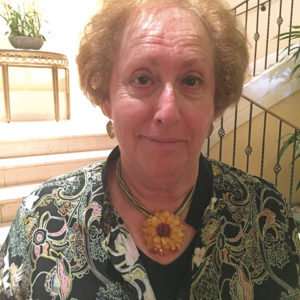 Yaroslavsky, wife of former Los Angeles County Supervisor and Los Angeles City Councilman Zev Yaroslavsky, was a longtime community leader and activist. She was diagnosed with West Nile virus approximately five to six weeks ago, said Joel Bellman, a spokesman for the Yaroslavsky family. She was hospitalized at Cedars-Sinai Medical Center but showed signs of improvement recently and was discharged on Dec. 21. to a care facility for recovery. She suddenly collapsed at the facility on Dec. 26 and died a short time later, Bellman said.

“We are shocked and devastated by this turn of events,” read a statement from the Yaroslavsky family. “We have lost an exceptional mother, a loving grandmother, and a beloved wife and partner in life. There are no words to describe what we are feeling at this moment, but our loss is profound and the void in our lives is immeasurable.”

“Los Angeles lost a dedicated activist and an unwavering champion for children and families – and Amy and I lost a cherished mentor and a dear friend,” Garcetti said. “Barbara Yaroslavsky never stopped fighting for what she believed in. She was a model of what it meant to practice Jewish values in public life. An Angeleno born and raised, she worked every day to make our city a more fair, just and compassionate place to work and live. I will miss her wisdom and leadership, and I hope it is a comfort to Zev and their children and grandchildren that so many mourn Barbara’s passing at this time. May her memory be a blessing for all of us.”

“Barbara Yaroslavsky was an extraordinary activist and community leader who made an indelible impact on everyone whose lives she touched. She was a champion for families, and fiercely devoted to improving public health and education,” Feuer said. “Her tragic death is a tremendous loss for our city and a heartbreaking blow to her family and many friends. She will be deeply missed.”

“My family and I are shocked and saddened by the tragic loss of Barbara Yaroslavsky. Our thoughts and prayers are with Zev and his family as we join their many friends in mourning her passing,” Koretz added. “The city and state have lost a remarkable woman who has done so much for others in so many ways.”

Barbara and Zev Yaroslavsky were married in 1971. Zev was pursuing a career in public office and Barbara embarked on a lifelong commitment of activism in the Jewish community and on behalf of nonprofit and social service agencies involved in education and healthcare, Bellman said. The Yaroslavskys were married for 47 years.

Bellman did not know where Yaroslavsky contracted West Nile virus and said she had not been on any trips to places where the virus is prevalent prior to her diagnosis.

“It was a bolt out of the blue,” Bellman said. “It was stunning news.”

Barbara Yaroslavsky was a member of the Los Angeles Commission on Communities and Family Services, the California Board of Registered Nursing, the advisory board for LA’s BEST Afterschool Enrichment Program and Friends of the Saban Community Clinic. She was also a past chair and member of the Medical Board of California.

“Barbara was loved and admired throughout the community for her caring and compassion, where friends, colleagues and associates always knew they could count on her energy and dedication to make things happen and keep striving always to offer advice and assistance to help improve the lives of everyone she encountered,” read an additional statement provided by Bellman.

Barbara Yaroslavsky is survived by Zev, son David and daughter Mina, as well as four grandchildren, a brother and sister, and other family members. Her funeral was held on Dec. 30 at Mt. Sinai of the Hollywood Hills. In lieu of flowers, the family requests contributions in Yaroslavsky’s name to the Saban Community Clinic.

My most memorable meals of 2018