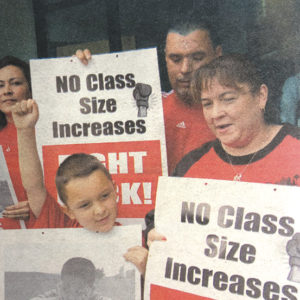 Los Angeles Unified School District parents Gabriel and Nahela Lara, and their son Gabriel Jr., protested outside Los Angeles Unified School District headquarters in this photo in the April 16, 2009, issue of the Park Labrea News and Beverly Press. The Laras joined a United Teachers Los Angeles protest that was one of many that year in opposition to budget cuts that could have resulted in thousands of teacher layoffs and larger class sizes. This year, teachers, parents and students picketed since Jan. 14 in the first LAUSD teachers strike in 30 years. On Tuesday, the district and United Teachers Los Angeles announced a deal had been reached, and teachers and students returned to classes the following day.

Musician to speak about breaking the color barrier