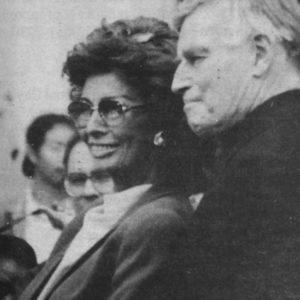 Actress Sophia Loren was shown in a photograph in the Feb. 3, 1994, issue of the Park Labrea News and Beverly Press that accompanied an article about the 107th anniversary of the founding of Hollywood. Loren received a star on the Hollywood Walk of Fame and was accompanied by her friend, actor Charlton Heston, a former Park La Brea resident. Loren received the first of 150 new stars that were announced that year as part of the anniversary celebration. Her star is located at 7060 Hollywood Blvd. The Hollywood Chamber of Commerce also announced that year the Walk of Fame was expanding along a revitalized part of Hollywood Boulevard near La Brea Avenue.