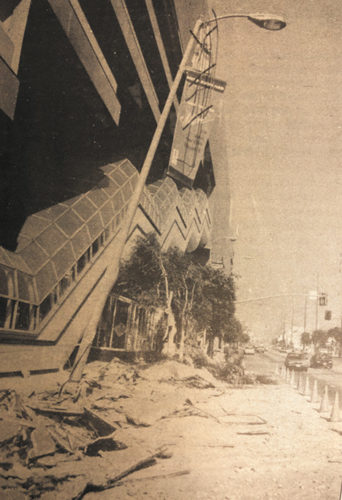 The Northridge Earthquake occurred 25 years ago today and caused significant damage throughout the Los Angeles region. A photograph in the Jan. 20, 1994, issue of the Park Labrea News and Beverly Press showed buckled sidewalks and the damaged facade of the Beverly Center. The Northridge Earthquake also caused the Fairfax/La Cienega offramp from the Santa Monica (10) Freeway to collapse, severely damaged many buildings and knocked items off shelves at stores throughout the area. Fifty-seven deaths, primarily in the San Fernando Valley near the epicenter, were attributed to the magnitude 6.7 temblor. Damage from the earthquake was estimated as high as $44 billion.

MacArthur Park ... in the rain

‘Prior Pleasures’ debuts in West Hollywood