There’s still time to catch “Rick Bartow: Things You Know But Cannot Explain,” the first major retrospective of work by Bartow, a member of the Mad River Band Wiyot, at the Autry Museum of the American West. The exhibition runs through Jan. 6. 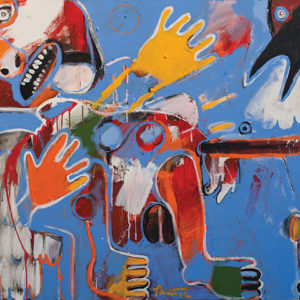 Rick Bartow drew influence from contemporary masters such as Francis Bacon, Robert Rauschenberg and Jean-Michel Basquiat, as seen in his painting “Creation of Crow.” (photo courtesy of the artist and Forelock Gallery)

Bartow established his art career in the 1980s following service in Vietnam and a period of recovery from PTSD and alcoholism. In “Things You Know But Cannot Explain,” viewers can explore the late artist’s large-scale paintings, drawings, prints and sculptures featuring haunting combinations of animal and human forms.

Divided into thematic sections such as “Self,” “Dialogue” and “Tradition,” the exhibition speaks directly to the personal and cultural aspects of traditional native art within Bartow’s oeuvre while demonstrating his close engagement with the work of 20th-century masters, including Francis Bacon, Robert Rauschenberg and Jean-Michel Basquiat.

The exhibition was organized by the Jordan Schnitzer Museum of Art at the University of Oregon.

The Autry is located at 4700 Western Heritage Way. For information, visit theautry.org.