The Wallis presents West Coast run of ‘An Inspector Calls’

Stephen Daldry, of “The Crown,” “Billy Elliot” and “The Inheritance,” presents his National Theatre of Great Britain’s landmark production of J.B. Priestley’s classic thriller “An Inspector Calls” with an exclusive West Coast engagement at the Wallis Annenberg Center for the Performing Arts from Tuesday, Jan. 22, to Sunday, Feb. 10. 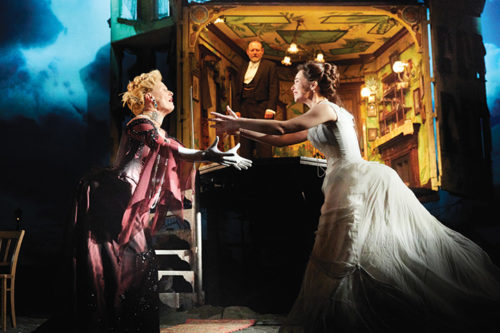 The prosperous Birling family is under investigation for the death of a young woman in “An Inspector Calls.” (photo by Mark Douet)

Winner of three Olivier’s and four Tony’s, and featuring an iconic grand-scale set, Daldry’s production has been seen by over 4 million theatergoers worldwide.

Daldry faithfully and expertly remounts “An Inspector Calls” as a modern reimagining of the original 1945 script, set in 1912, about Inspector Goole and his unexpected arrival at the prosperous Birling family home, shattering their peaceful dinner party by his investigations into the death of a young woman. His startling revelations shake the very foundations of their lives and challenge audiences to question their own consciences.

“Daldry’s iconic production of ‘An Inspector Calls’ was a transformative moment for theater in the UK,” said Paul Crewes, The Wallis artistic director. “Daldry, and his designer, Ian MacNeil, created an aesthetic that helped tell this story to a whole new generation of audiences. It’s one of the most gorgeous pieces of theater I’ve seen.”

Mudflow raises concerns for residents downslope in the Hollywood Hills