The J. Paul Getty Museum has acquired “Interior with an Easel, Bredgade 25,” painted in 1912 by Vilhelm Hammershøi. The painting is now on view at the Getty Center. 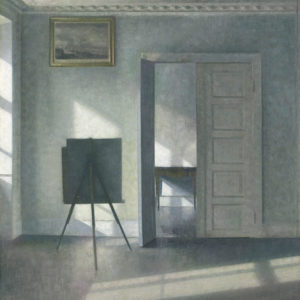 “‘Interior with an Easel, Bredgade 25’ is a characteristically luminous and enigmatic image that encapsulates Hammershøi’s particular visual poetry,” said Timothy Potts, director of the J. Paul Getty Museum. “Hammershøi’s carefully orchestrated compositions are defined by their sparse atmospheric mood, using a few familiar pieces of furniture and the fall of light through a window to create some of the most beautiful, contemplative interiors in the history of painting.”

Hammershøi began depicting interiors in the late 1890s, and these austere and meditative paintings came to define his artistic reputation, already established by the time he made “Interior with an Easel, Bredgade 25.” With single-minded focus, these interiors represent the apartments in Copenhagen that Hammershøi shared with his wife Ida and that served as his de facto studio. Bredgade 25 was the address of his final apartment.

Sometimes his work features his wife quietly absorbed in a domestic task, but frequently there is no human presence – the primary subject being the play of light in the sparsely furnished architectural space. Here the only props, besides the artist’s easel, are a framed painting hung high on the wall, to protect it from direct sunlight, and a small table in the far room, framed perfectly by the half-open doorway.

Well-known and highly regarded in his own lifetime, Hammershøi’s career was cut short by his death from cancer at the age of 51. His work fell into relative obscurity and for much of the 20th century he was scarcely known outside of Denmark. Over the last few decades, however, there has been a resurgence of interest in Hammershøi’s work internationally.

“‘Interior with an Easel, Bredgade 25’ is a work of great power and stark beauty, mesmerizing in its sense of stillness and silence. All the elements of a great Hammershøi are here: the masterful rendering of the cool Nordic light, the exquisitely nuanced tonal harmonies, the geometric rigor of the planar composition, the shimmering weave of small, textured brushstrokes – all working to transfigure the mundane into something haunting and poetic,” said Davide Gasparotto, senior curator of paintings at the Getty Museum. The Getty Museum is located at 1200 Getty Center Drive. For information, visit getty.edu.