Students and teachers at Hancock Park Elementary School, wearing ponchos and holding umbrellas along with their picket signs on a rainy Monday afternoon, began the first teachers strike in the Los Angeles Unified School District in 30 years. 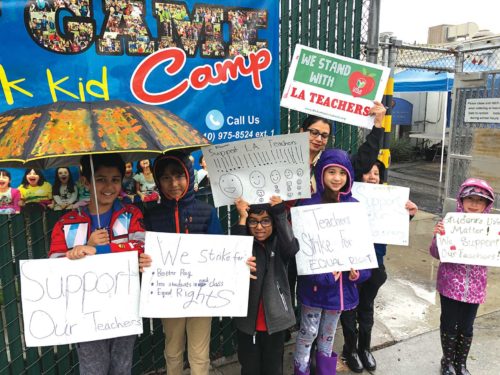 “We just feel like they’re not negotiating in good faith,” said Sharon Patricia Cummings, a teacher at Hancock Park Elementary for 22 years, and one of over 30,000 LAUSD teachers on strike.

United Teachers Los Angeles is fighting for smaller class sizes, better wages and benefits, and fully staffed schools that include librarians, nurses and special education teachers. The district made an offer to the union that it said would help achieve those goals by adding 1,200 educators and a 6 percent pay increase. The union wants LAUSD leadership to use more of its approximately $2 billion in reserves to make a better offer. But according to the district, much of that money is already committed to state and federal programs that support students, and current budget projections show a depleted reserve by 2020-21.

Schools remain open with classes led by non-union staff and substitute teachers. But plenty of parents, including Mayra Santiago, who supports the teachers and whose son attends Hancock Park Elementary, are keeping their children out of school until the strike is resolved. According to the district, 143,993 students at more than 1,200 schools were present on the first day of the strike. On Tuesday, 163,384 students were in attendance. The district has approximately 600,000 students.

“While education in classrooms is not the same without teachers, we have a responsibility to keep schools open and provide students with a safe space, shelter from the rain, meals and modified instruction,” Superintendent Austin Beutner said in a statement on Tuesday. “I am grateful for the tens of thousands of my colleagues – bus drivers, cafeteria workers, principals and educators – who are here to provide those students with a safe and welcoming learning environment.”

Many of the district’s teachers, however, don’t feel the district, or the state, is doing enough to support public schools. Bill Hochhaus, another teacher at Hancock Park Elementary who joined the picket line on Fairfax Avenue, mentioned per-pupil spending, a metric that has consistently shown California in the bottom 10 in statewide rankings, according to organizations such as EdWeek and the California Budget and Policy Center.

“The state needs to step up and find money for the kids too,” Hochhaus said.

“This impasse is disrupting the lives of too many kids and their families,” Newsom said. “I strongly urge all parties to go back to the negotiating table and find an immediate path forward that puts kids back into classrooms and provides parents certainty.”

Nick Melvoin, vice president of the LAUSD school board, said the district is waiting for the union to return to the negotiating table. United Teachers Los Angeles opposed Melvoin when he ran against incumbent Steve Zimmer for the Board District 4 seat, saying Melvoin was too inclined to shift the district’s focus to charter schools. Many teachers on strike attribute the rise in charter schools to the erosion of resources for traditional public schools. Melvoin, who is viewed as part of the new “pro-charter” iteration of the board, said no new charters have opened in his district since he took office, and that the school district is only trying to work within its financial constraints – which includes projections vetted by the county Office of Education that show LAUSD could have trouble meeting its financial obligations over the next few years.

“If anything, we’re trying to find ways to bring more revenue to our local schools,” he said.

Alex Caputo-Pearl, president of the teachers union, joined teachers and students at a few events scheduled over the weekend, and at a first-day strike march from City Hall to LAUSD headquarters.