Street vendors could be coming to Beverly Hills

An urgency ordinance to regulate street vending in Beverly Hills went into effect this year, corresponding with a law signed by the governor that allows vendors to operate throughout the state.

Street vending was not previously allowed in Beverly Hills, but the city needed to conform its laws with the new state regulations by Nov. 1. City Council members derided the new law as “an attempt to make one size fit everybody.” 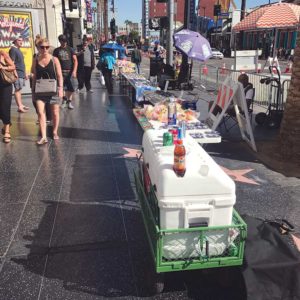 Street vendors, prevalent throughout L.A., will now have a chance to apply for permits to sell their wares in Beverly Hills due to new state law. (photo courtesy of Kerry Morrison)

“As a lover of bacon-wrapped hot dogs as I leave Staples Center, this may surprise some of you,” Councilman Les Friedman said. “This is really a stupid law that the state of California passed. I don’t know what they’re thinking.”

The law applies to vendors who sell food or merchandise from a cart, stand or other fixture on public rights of way such as the sidewalk.

“Here, we’re in an economy where people are paying significant amount of rent for locations,” Friedman continued. “Property owners are improving their property, and we are going to permit people to sell things in carts on the public right of way. It just doesn’t make sense to me at all.”

The Legislature approved SB 946, by Sen. Ricardo Lara (D-Bell Gardens), 24-12 in the Senate and 56-17 in the Assembly. Assemblyman Richard Bloom and Sen. Ben Allen, who both represent Beverly Hills, voted for it. It is designed to allow vendors, some of whom are immigrants or based in low-income communities, a chance to contribute to their local economies. Other cities, including Los Angeles, had been discussing the legality of sidewalk vending for years. The Los Angeles City Council approved a set of street vending regulations in November.

“With Senate Bill 946 we can start seeing sidewalk vendors for who they are – women and seniors, single parents, and micro-business owners taking that first step to starting their own business,” Lara said in a statement after the bill was signed into law. “Governor Brown’s signature validates that thousands of sidewalk vendors are an important part of our economy, whose hard work supports their families and gives California its unique flavor.”

Vendors will have to get applications from the city. They have to operate at least 200 feet away from other sidewalk vendors; 500 feet away from places of worship, daycare facilities, schools and school athletic fields; 100 feet from picnic areas, playgrounds, intersections and traffic signals; 25 feet from emergency exits; and 15 feet from a fire hydrant, fire call box or police call box. Vendors can face fines up to $1,000 for repeat violations of the city ordinance.

City staff said they still have to figure out the additional enforcement that will be required to ensure vendors are adhering to the law. The ordinance will come before council again this year for adjustments.

“This is an example of Sacramento running amok and it goes to the question, do you want Sacramento making more decisions, or should more decisions be made closer to home?” Beverly Hills Vice Mayor John Mirisch said. “It’s a fundamental question of principles, and I think this overreach pretty much answers it.”