Detectives are asking for the public’s help to identify a suspect who shot and killed a 26-year-old man on Beverly Boulevard near Saint Andrews Place on Jan. 9. 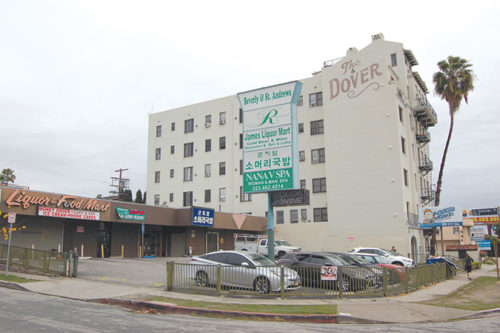 A victim was shot near the corner of Beverly Boulevard and Saint Andrews Place on Jan. 9, and sought help at a nearby liquor store. The victim later died at a hospital. (photo by Edwin Folven)

The shooting occurred at approximately 10:25 p.m. in the 4700 block of Beverly Boulevard, between Western Avenue and Wilton Place. The victim, Juan Cuevas, was standing on the sidewalk alone when a male suspect approached, pulled a gun and shot him once in the torso.

“He was hanging out on the north sidewalk when he was shot,” said Lt. John Radtke, with the LAPD’s West Bureau Homicide Unit. “He does not live there, but apparently frequents that location.”

The victim walked to a nearby liquor store to seek help and a clerk called 911. Police arrived and paramedics took Cuevas to a hospital, where he died.

Cuevas was a Los Angeles resident, but the neighborhood where he lives was not released. Radtke also did not have any further information about why Cuevas was in the area where he was shot.

The suspect was described as a Hispanic man wearing dark clothing. He was last seen heading west on Beverly Boulevard.

“So far we have no motive and no suspects,” Radtke said. “Juan is not known to be a gang member. We don’t know what led up to the shooting.”

The neighborhood where the shooting occurred is not a high crime area, but there is sometimes gang activity in the surrounding community, Radtke added. Investigators have been canvassing the neighborhood and security camera footage.

“The guys are working this hard, knocking on doors and looking for witnesses,” Radtke added.