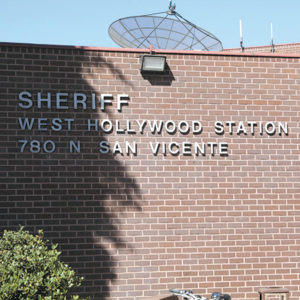 Sheriff’s department detectives are investigating the Jan. 7 death of a man at the Laurel Avenue home of prominent Democratic donor Ed Buck. It is the second time someone has died at Buck’s home since 2017. (photo by Joshua Barash)

Deputies from the West Hollywood Sheriff’s Station and paramedics responded to Buck’s home at 1234 N. Laurel Ave. shortly after 1 a.m. on Jan. 7. They found a man unconscious and pronounced him dead at the scene.

The cause of the death is unknown and no arrests have been made, according to a sheriff’s department press release. The Los Angeles County coroner’s office will conduct an autopsy to determine cause of death. The victim was identified as Timothy Michael Dean, 55.

Buck’s attorney Seymour Amster said the death appears to have resulted from an overdose, with the victim ingesting an unknown drug prior to visiting Buck’s home. Amster said Dean was a longtime friend of Buck, who is 64.

“Ed has a heart of gold and has tried to help individuals who have engaged in unfortunate life decisions regarding substance abuse. That’s what happened in both instances,” Amster said. “It’s a tragedy. It’s as simple as that.”

The attorney said Buck received a call from Dean late on Jan. 6 and the man asked to come over. The two had been friends for more than 25 years and Buck reluctantly allowed the visit, Amster said. Shortly before 1 a.m., Dean began exhibiting what Amster called “bizarre behavior” prior to losing consciousness.

“Mr. Buck saw the man exhibiting behavior indicating he needed medical assistance and called paramedics,” Amster added. “When paramedics arrived, they were unable to resuscitate him. He died at the apartment.”

The sheriff’s department said Buck called 911 at approximately 1:05 a.m., and he attempted CPR on Dean before paramedics arrived. Homicide detectives will oversee the new death investigation and conduct follow-up interviews and a secondary review of the 2017 death. The Los Angeles County District Attorney’s Office will also review the new case and the Moore case.

Police found drug paraphernalia in Buck’s home when Moore died, including syringes, pipes and baggies with white powdery residue, according to a coroner’s office report. It was unclear if any similar items were found on Jan. 7.

“He was trying to counsel a longtime friend,” Amster said. “It’s a tragedy, no matter what.”

Following the death on Jan. 7, calls have surfaced for authorities to more vigorously investigate Buck.

“The Los Angeles LGBT Center calls upon Los Angeles County Sherriff Alex Villanueva and his department to fully investigate this tragedy and aggressively seek justice wherever the investigation might lead,” read a statement by the Los Angeles LGBT Center. “Although the investigation is in its early stages, we urge Sherriff Villanueva to keep the public fully informed as LGBT people have a considerable and urgent interest in a case that is so clearly linked to the health and safety of our community. The reports we have heard provide more questions than answers. The fact is two black men have died at Mr. Buck’s home in less than two years. While much is still to be learned, it appears this tragedy is linked to substance use. LGBT people and other marginalized groups are at elevated risk for impacts that result from the current epidemic uses of opioids, methamphetamine and other dangerous drugs.”