Second lines on parade at the Fowler Museum 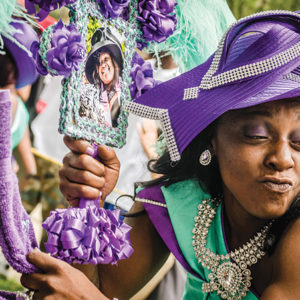 Johnson has been photographing second lines in New Orleans for more than a decade. Driven by upbeat music, the second line is a unified whole made up of a first line of African American Social Aid and Pleasure Clubs members and the band, and a second line of families, tourists and neighbors who walk and dance with them.

Originating in the mid-19th century as benevolent associations dedicated to charitable work within the black community, SAPCs have marched on Sundays and special occasions for generations. Collectively, the clubs manage a parade calendar of roughly 40 Sundays per year, and each member has a task to perform: coordinating city permits and marching routes, fundraising, and honoring deceased community members.

Elders teach younger participants the how and why of the tradition: basic choreography, how to pace one’s self for up to four hours of dance, where to stop in and pay respects to local businesses, and other facets of second-lining, current and historical.

Unmistakable in custom-tailored suits and gowns, matching hats and shoes, and colorful accessories such as parasols, sashes and feathered fans, second lines weave their way through the city accompanied by local musicians playing trombones, trumpets, tubas and drums. Mixing together with crowds of all ages, the procession embodies a rich local tradition of music, movement and the demonstration of cultural pride.