School is back in session for LAUSD

Hours before a deal to end the Los Angeles Unified School District teachers strike was announced, teachers at West Hollywood Elementary School picketed along the Sunset Strip on a windy Tuesday morning with a few of their students. 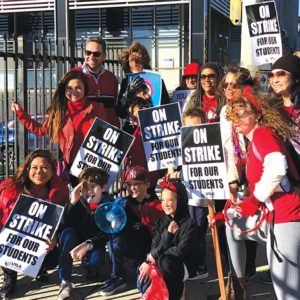 Teachers and students at West Hollywood Elementary picketed along the Sunset Strip one last time on Tuesday, hours before United Teachers Los Angeles and LAUSD administration ended the strike. (photo by Luke Harold)

“I think we’re definitely making a change,” said Juliet Melzer, who has been a teacher at West Hollywood Elementary for 14 years. “People are hearing us loud and clear throughout the country.”

Terms of the deal between the Los Angeles Unified School District and United Teachers Los Angeles include a 6 percent pay increase for teachers, reducing class sizes by four students for grades 4-12, and increasing nurses, library services and counselors.

Los Angeles Mayor Eric Garcetti, whose office was involved in marathon negotiating sessions at City Hall when both sides resumed talks on Jan. 17, indicated on Monday that a resolution could be imminent. Teachers and union leadership assembled at Grand Park on Tuesday afternoon to announce the deal.

“For too long teachers have lived with a hard truth to tell – that for years our students were being starved of the resources they need,” UTLA President Alex Caputo-Pearl said in a statement. “Our expectations were fundamentally raised by this strike. Together we said we deserve better, our students deserve better. We must keep our expectations high and not let go of this moment, because the next struggle is right around the corner.”

Many teachers said the rise of charter schools in the district has contributed to a lack of resources for traditional public schools. The deal also includes the formation of committees by the school district and teachers union to go over charter co-location, as well as pay equity, an English learner master plan that includes sign language, and green space in school campuses.

“Today marks a new chapter in public education for Los Angeles Unified,” Superintendent Austin Beutner said in a statement shortly after the deal was announced on Tuesday. “Public education is the ultimate labor-management collaborative and we are committed to working together to make sure every student gets a great education.”

District administration, and school board Vice President Nick Melvoin, said there needs to be a greater investment in the public schools by the state, which provides most of LAUSD’s funding. Gov. Gavin Newsom’s “California for All” budget proposal included an increase in money for public education.

“Forty years of underinvestment in public education cannot be solved in just one week or with just one contract. Now that students and all educators are heading back to the classroom, we must focus our attention to properly fund our schools for the long term.”