Remains identified from woman with Alzheimer’s who went missing

Human remains found near a park in the hills south of Sherman Oaks confirm the death of Nancy Paulikas, who went missing two years ago during a visit to the Los Angeles County Museum of Art. 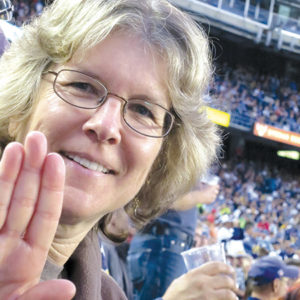 Nancy Paulikas went missing in October 2016 in the Miracle Mile. Human remains found in a park near Sherman Oaks confirmed she is deceased. (photo courtesy of Kirk Moody)

The Los Angeles County coroner announced on Dec. 26 that Paulikas had been identified through DNA testing of bones. The cause of death was deferred pending further investigation.

Firefighters found a partial skull while battling a brush fire near Fossil Ridge Park on March 11, 2017. The skull was turned over to the coroner’s office, LAFD spokeswoman Margaret Stewart confirmed. Coroner’s office investigators found rib bones during a subsequent search of the same area in 2018.

The death is being investigated by the Los Angeles Police Department. Authorities did not comment because the investigation is in the early stages.

Until the remains were identified, the investigation into Paulikas’ disappearance was handled as a missing person case by police in Manhattan Beach, where she lived with her husband, Kirk Moody. Paulikas, who was 55 when she went missing, had Alzheimer’s disease. Moody, who searched tirelessly for Paulikas during the past 26 months, said coroner’s office officials notified him about her remains being identified on Dec. 26.

“It was a surprise. I think we knew there was always a possibility out there [she would be found deceased] so it was not highly unexpected,” Moody said. “She met a frightening end. There is no way to sugarcoat it. Something bad happened.”

Paulikas, Moody and other family members visited LACMA on Oct. 15, 2016. The couple separated when Paulikas and Moody went into different restrooms.

After they were unable to find Paulikas, Moody and the group searched the museum and its grounds, assisted by security. Police searched the surrounding neighborhoods, but Paulikas was not located.

In the weeks after her disappearance, Moody and a small army of family members, friends and volunteers canvassed the neighborhood posting fliers and looking for clues. A security camera on Wilshire Boulevard west of Fairfax showed footage of Paulikas walking alone toward Crescent Heights Boulevard shortly after she was last seen at LACMA.

The Manhattan Beach Police Department investigated many possibilities about what may have happened to Paulikas, including that she was living on the streets or had been taken in by a stranger or caregiver. Moody and his supporters visited or notified hundreds of assisted living and care facilities throughout Southern California searching for Paulikas. The theory was that someone had taken her in and was illegally collecting public benefits. Investigators searched state Medi-Cal records to determine if benefits were being paid in her name, but no evidence of that was found.

Investigators were also frequently in contact with the coroner’s office, which had no unidentified bodies meeting Paulikas description. The coroner’s office initially sent the skull, and later the rib bones, to the California Department of Justice for DNA testing. On Dec. 26, the department of justice notified the coroner’s office that the skull and ribs had been matched to Paulikas, county coroner spokeswoman Sarah Ardalani said. Paulikas’ disappearance prompted county leaders to examine ways to better protect people with Alzheimer’s disease and dementia who are prone to wandering away. Spearheaded by Los Angeles County Supervisor Janice Hahn, 4th District, the board approved the LA Found program in February.

People with loved ones suffering from dementia can purchase tracking bracelets that can be activated if they disappear. The county funded technology that enables law enforcement to track a sensor in the bracelets.

“I am heartbroken,” Hahn said in a statement. “For two years we have kept hope alive that Nancy would be found safe and could be reunited with her family. Her husband, Kirk, has been so brave. He has not only been unyielding in his search for his wife, but wanted to make sure no one else would have to go through what he did. He is the reason that we now have LA Found, a countywide program to find individuals who wander using trackable bracelets. I want to thank everyone who continued the search for Nancy. May she rest in peace.”

Moody said the LA Found program will forever be intertwined with his wife’s life and legacy.

My most memorable meals of 2018

Dr.Vikki Hufnagel MD. I researched this case when it took place.Even spoke at the weekly mayor’s meetings. NO one wanted to deal with this horror story. Now is a time for actual change. A BRACELET is pathetic..I will write what I learned from this crimes created by silence and uncaring.