The Los Angeles Rams and the New England Patriots will face off on the gridiron on Feb. 3 in Super Bowl LIII, but hungry fans don’t have to wait until Sunday to celebrate with a super meal. 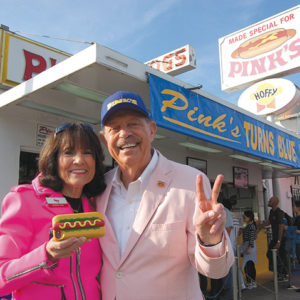 Richard and Gloria Pink decked out their stand in blue and gold to celebrate the Rams’ first trip to the Super Bowl since returning to L.A. (photo by Edwin Folven)

Pink’s Hot Dogs at Pink’s Square near La Brea and Melrose avenues launched its tribute to the Rams and the Super Bowl earlier this week by painting the pink stand blue and gold, adding blue and gold umbrellas and tables, and most importantly, celebrating with a special hot dog to mark the Rams’ first time back to the big game since returning to Los Angeles.

“I’m so proud that the L.A. Rams are back here in Los Angeles and so proud that they are playing in the Super Bowl,” said Richard Pink, who operates the stand with his wife Gloria and sister Beverly. “This is Super Bowl week at Pink’s. We turned everything blue and gold, from the front of Pink’s to the umbrellas to the poles in the parking lot. Our staff is wearing ‘Pink’s loves the L.A. Rams’ shirts and we created a special menu item for the L.A. Rams to celebrate their trip to the Super Bowl.”

The special hot dog costs $5.30, and all proceeds will be donated to the Los Angeles Rams Foundation. Pink also made a $500 wager with the owner of Spike’s Junkyard Dogs in Boston, with the winner donating the money to charity. If the Rams win, the team’s foundation will receive an additional $500, Pink said.

Pink made a similar bet with Spike’s last fall when the Los Angeles Dodgers played the Boston Red Sox in the World Series. Although the Red Sox won that series, Pink is confident Los Angeles will prevail in the Super Bowl. He predicts it will be a close game, with the Rams winning by three points.

Just as the stand celebrated the Dodgers’ appearances in the last two World Series, Pink hopes the Rams playing in the Super Bowl will become an annual tradition. He said the city is renowned for top sports franchises, and he has long been a fan of all L.A. teams.

“L.A. is the sports capital of the world, and Pink’s wants to pay tribute to the tremendous, legendary teams,” Pink said. “First, the Dodgers made it into the World Series and now the Rams into the Super Bowl. That means that Los Angeles is number one, and Pink’s wants to recognize the stature of L.A. as a sports capital and the tremendous spirit of the fans, many of whom have dined at Pink’s since they were little kids and so appreciate that an iconic hot dog stand that’s been around for close to 80 years feels that it is part of the culture and the fabric and the spirit of Los Angeles.”

Pink said the hot dogs and hamburgers are perfect for a Super Bowl party, and the stand is a great place to celebrate after the big game.

“The time to really show our love and support is when they’re in the greatest sports event that occurs in our country, and that’s the Super Bowl. The Rams have had a lot of battle scars and a lot of battle stars, and I believe they are going to bring home a battle star this time around. I am hoping everybody after the game will celebrate at Pink’s. Go Rams.”