The Craft & Folk Art Museum announced on Jan. 15 that it is changing its name to Craft Contemporary. 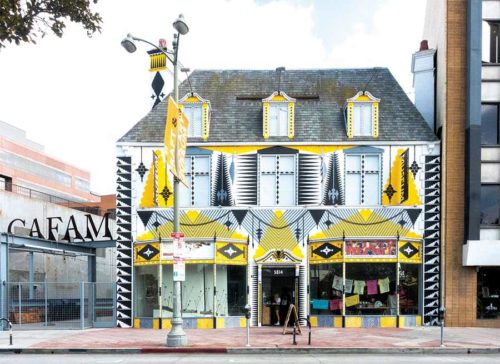 Under the direction of executive director Suzanne Isken, who has led the museum for eight years, the museum’s focus has changed to contemporary art made with craft media, techniques and processes. The name Craft Contemporary – the third name in the museum’s history – better defines the museum’s current emphasis on the similarities and disparities between craft, design and contemporary art, Isken said.

“The change had been considered since 2014. We have been really focusing on our exhibits and programs of independent artists,” Isken added. “The name reflects more of what the museum is about. Contemporary art has become so much more fluid, and there is more fluidity between craft and folk art. We have changed our programs over the last eight years, and the new name reflects what we have been doing.”

“‘Craft Contemporary’ emphasizes the word ‘craft’ as a verb and a noun – celebrating both the act and outcome of making,” Isken said. “With our new name, we continue to respect the deep history of the craft field while also looking forward to its bold and exciting future.”

Craft Contemporary collaborated with the firm Siegel + Gale, which also helped rename the Museum of Art and Design in New York, to develop its new name and logo. Siegel + Gale interviewed museum stakeholders and community members to gain an understanding of the institution’s current program and scope. The trustees and leadership agreed that the museum’s innovative presentations of contemporary art are broader than the terms “craft and folk art” suggest. Isken said new signage for Craft contemporary will be installed soon.

Cortez is also collaborating with Los Angeles artist Rafa Esparza on Nomad 13, an installation that will appear on the museum’s first floor. The exhibitions open concurrently with “Focus Iran 3: Contemporary Photography and Video,” a biennial juried exhibition that offers perspectives of youth culture in Iran and the Iranian diaspora.

Opening in the summer are “The RIDDLE Effect,” which examines the work and legacy of the late John Riddle, a key figure in the Black Arts Movement of Southern California, and “On the Inside,” a presentation of drawings by incarcerated LGBTQ+ artists.

The year concludes with “RAW: Craft, Commodity, and Capitalism,” a group exhibition of artists who use colonial commodities like salt, sugar, cotton and coffee to examine the problems of existing economic and social systems.

In conjunction with exhibitions, Craft Contemporary offers weekly educational opportunities such as artist-led workshops, and provides opportunities for local and exhibiting artists to sell handcrafted works.

The museum began in 1965 as a gallery and café known as The Egg & The Eye, founded by Edith Robinson Wyle. In 1973, the space transformed into the Craft & Folk Art Museum to reflect Wyle’s commitment to elevating global handcraft and folk art.

Located at 5814 Wilshire Blvd., Isken said Craft Contemporary will remain an important component on Museum Row. She added that exhibits on emerging artists and more hands-on activities set it apart from the neighboring museum.

“We love being here on the Miracle Mile with our museum partners,” Isken said. “It’s a great place to be.”

Kramer named ‘Trailblazer of the Mile’