Diners will be begging for more after they scrape the last spoonful of the seasonal porridge at Porridge + Puffs. 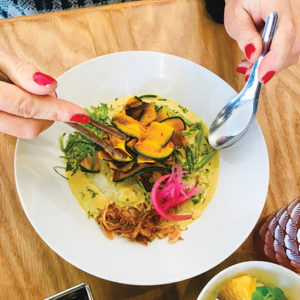 The corner restaurant in Historic Filipinotown features an inviting and airy atmosphere. My daughter and I sat down at a blonde wood table banquette and admired the large handmade collage of dried herbs and flower fastened to the white wall. Each place setting had a porridge spoon, napkin and chopsticks.

The menu is broken into four sections – porridge, plants, puffs and drinks. Some dishes offer crisp and crunchy items to pick up with the chopsticks, and others can be enjoyed with a spoon.

We started with a couple of drinks – jasmine iced tea and hibiscus-shiso shrub. Shrub is a drinking vinegar infused with fruit juice, herbs and spices. It’s similar in taste to a kombucha, but syrupier. Hot beverages include Peri drip coffee and loose-leaf teas.

The restaurant’s porridge is a little like oatmeal, but also like grits or congee. Chef Minh Phan boils a Japanese-style, medium-grain rose rice grown exclusively on Koda Farms in Dos Palos, a city in Merced County, California. The rice is crushed and served hot in a bowl with a nice balance of sweet and savory items.

The seasonal porridge I ordered was topped with thin slices of bright orange kabocha squash, also known as Japanese pumpkin, which offered a pop of color and texture to the tender and sticky porridge. Phan and her sous chefs thinly slice the squash and braise it in coconut curry before adding tangy pickles and fresh herbs. 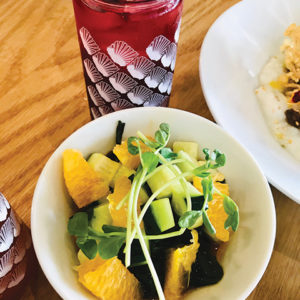 The cukes and seaweed bowl is a refreshing dish made with peppery Chinese prickly ash, cucumbers, savory kombu seaweed, and sweet mandarin slices and microgreens. (photo by Jill Weinlein)

Other porridges include sweet soy-braised chicken and turkey topped with mushrooms, crispy shallots, celery and small edible flowers. Phan also braises beef brisket in sake for half a day and dazzles short ribs with the superfood jujube fruit for a splash of sweet apple and date flavors. For an even more savory porridge, add a hibiscus-shiso pickled soft egg on top for an extra $2.

Under the plants section, Phan offers a bold Asian herb slaw with earthy rau ram (Vietnamese coriander), shiso, holy basil, peanuts and sesame. We also ordered the cukes and seaweed bowl, which featured cucumbers pickled with Chinese prickly ash. Tucked away at the bottom of the dish was a seaweed, known as kombu, with mushroom-like flavors. The pepperiness of the Chinese prickly ash paired perfectly with the savory kombu, as well as with the sweet and earthy satsuma mandarin slices and microgreens topping off the dish.

Per our server’s recommendation, we tried the naked puffs for dipping in the porridges. These slightly greasy, puffed fry bread sticks reminded us of French beignets without the powdered sugar. For a sweet treat, the puffs can be ordered dusted with cardamom sugar and a touch of jasmine or coffee cream.

We wrapped up the meal with the soft brown butter mochi topped with miso caramel. It was delicious, tasting like French toast sticks or slices of sticky toffee pudding cake.

Since Porridge + Puffs opened a few months ago, it has already attracted quite a following. Head over now to try out the reasonably priced pan-Asian cuisine – it will leave you wanting more. $$ 2801 Beverly Blvd., Los Angeles, (213)908-5313.