Hoping to see a continuing decrease in homelessness, volunteers combed the streets, sidewalks and alleys throughout Los Angeles County on foot and by car for the annual homeless count from Jan. 22-25. 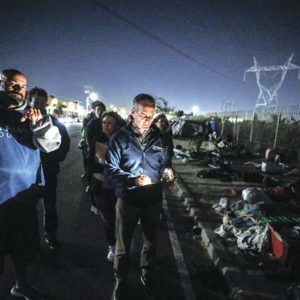 In Mid City West, where the count showed a small increase from 2017 to 2018, volunteers hope the recent voter-approved initiatives to address homelessness are starting to make a difference.

“There’s money behind it to actually do something,” said Steven Luftman, a board member on the Mid City West Community Council. “That part I’m optimistic about. It’s at the start, though, of solving a very difficult problem.”

Luftman, who has participated in four homeless counts, joined other Mid City West board members and local residents at the National Council of Jewish Women building on Fairfax Avenue on Jan. 24, when homeless counts throughout downtown L.A., the Wilshire area, Hollywood and South L.A. took place. The count is held each year by the Los Angeles Homeless Services Authority, which coordinates housing and services for the county’s homeless.

In Los Angeles County between 2014-17, the homeless population grew from 38,089 to 55,048. Last year’s countywide total of 52,175 marked a 4 percent decrease from 2017, and the Los Angeles citywide total of 31,516 was down 5 percent. But there was a 16 percent surge in newly homeless people throughout the county, rising from 8,044 in 2017 to 9,322 in 2018. County and city officials are starting to map out the projects to house the homeless and provide health services that will be funded by measures H and HHH.

“We’re solving what appears to be the tougher problem of helping the chronically homeless, but we also have to figure out how to turn off the supply of newly homeless,” Los Angeles City Councilman Paul Koretz, 5th District, told the volunteers before they split into groups and took to the streets. “One of the problems is that people occasionally will hit a short spell where they’re down on their luck. They may be living paycheck to paycheck and get laid off, so they might not be able to pay their rent for a month or two.”

In Mid City West, the count went from 164 in 2016, to 203 in 2017 and 224 in 2018, relatively small numbers compared to areas such as nearby Hollywood, which is part of the 13th Council District. CD13, led by Councilman Mitch O’Farrell, saw a decrease in homelessness last year, based on homeless count totals, but it still had the third highest homeless population of all council districts.

The homeless count showed a 26 percent decrease in the Council District 5 homeless population from 2017 to 2018. When last year’s numbers were released, Koretz warned against declaring victory after “just one year of very modest improvement.”

The 2018 count showed 777 homeless people in Councilman David Ryu’s 4th District, a negligible decrease from the year before, but his district remained in the bottom third in total homeless population compared to the 15 council districts.

“Without an accurate count,” said Nick Greif, Ryu’s chief of staff, “we can’t get the resources from both the county as well as the federal government, for our entire city, but in particular the resources to your local neighborhood to make sure that both you and your neighbors are getting adequate help for folks that are nearby you and of course the people experiencing homelessness in this community, that they’re not overlooked.”

In addition to last year’s increase in newly homeless people, the Homeless Services Authority also warned that many of the factors that cause homelessness, such as rising costs of living and stagnant wages, continue to beleaguer many Los Angeles residents.

“I’m not sure we’re making quite the dent that we need to to make the difference that we need,” said Heather Fox, a Mid City West board member who participated in the count for the second time. “But I think we just need to keep talking about it.”

WeHo candidates square off in forum

Garcetti announces he will not seek White House