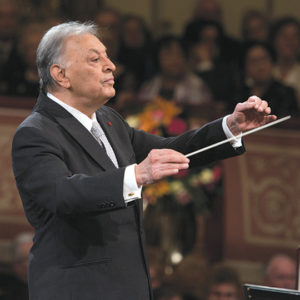 Zubin Mehta, the LA Phil’s new conductor emeritus, has a long history with the orchestra dating to when he became music director at age 26. (photo by Terry Linke)

The announcement was made from the stage of Walt Disney Concert Hall before the second half of Mehta’s concert leading the LA Phil in a program of works by Brahms. Woods also read a statement from LA Phil Music and Artistic Director Gustavo Dudamel.

“From the earliest stages of my career, I have been proud to call Zubin Mehta a trusted mentor and friend,” the statement read. “To follow in his footsteps as music director of the Los Angeles Philharmonic is a true honor. His soul permeates the sound of the orchestra, and his connection to the musicians is profound.”

Mehta has conducted the world’s most esteemed orchestras and introduced generations to classical music through more than 50 years of recordings and performances. Through his humanitarian work, Mehta has shown music’s ability to bridge cultures and bring people together.

“This is indeed a great honor and I’m very pleased to accept,” Mehta said. “The Los Angeles Philharmonic has always held a very special place in my heart. They took a chance and accepted me as a very young conductor. I remain grateful to the orchestra and I’m happy to continue our relationship in this way.”

Mehta was appointed LA Phil music director at age 26, making him its youngest person in the position at the time of his appointment. During his 16 seasons in Los Angeles, he was intent upon breaking down cultural and social barriers pervasive in the orchestral music community and positioning the orchestra as a community resource. Under Mehta’s leadership, the LA Phil appeared with Frank Zappa and the Mothers of Invention at UCLA, performed free concerts in black and Latino communities, and moved from Philharmonic Hall to the new Dorothy Chandler Pavilion.

In 2006, Mehta was presented with the Los Angeles Philharmonic Distinguished Service Award. He celebrated the 50th anniversary of his music directorship with the LA Phil in 2012. It was during an anniversary concert that year that he received a proclamation from Los Angeles County designating Dec. 13 as Zubin Mehta Day.