‘Mary Poppins Returns’ with equal charisma but no real spark

Of course Disney wants to reprise “Mary Poppins,” the beloved children’s film that clinched Julie Andrew’s only Oscar win. And let’s be clear: casting the delightful Emily Blunt as her replacement is remarkable, inspired, on point. She outshines the rest, including renowned Lin-Manuel Miranda of “Hamilton” fame. 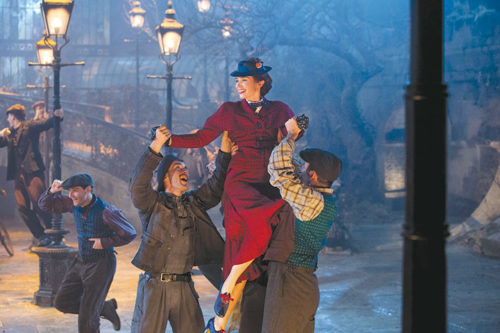 Emily Blunt is delightful as the title character in “Mary Poppins Returns,” but the new movie has a tough time living up to the classic 1964 film. (photo courtesy of Disney Pictures)

But for all the pomp and circumstance – and this one packs a whole lotta pomp – “Mary Poppins Returns” isn’t the instant classic it should be. Well-acted and visually theatric, yes. Original and effectively expanding the story into new territory, no. As for the music, it’s merely OK. And that should not be standard operating procedure from the studio behind “The Lion King” and “Frozen.”

Times have changed in Poppinsland. The Banks children grew up and now face financial hardship. Michael (Ben Whishaw), soft spoken and polite, finds himself in hard times following the death of his wife. But dear sister Jane (Emily Mortimer) returns home to help with the family as Ellen the maid (Julie Walters) can only do so much.

This isn’t the story of a high-class family and spoiled children. On the contrary, Mike’s three little ones are good friends with hard realities, from the park keeper’s (Steve Nicolson) continual warnings to stay off the grass (perish the thought of enjoying it) to having mere coins for groceries. Play is a privilege they just might grow out of too quickly.

But wait, what’s that in the sky? Birds, planes and supermen are so passé when Mary Poppins (Blunt), a rather literal force of nature, can glide through the east winds with an umbrella. A fortuitous arrival it is as the Banks have only days to find enough money to pay off a bank, lest they lose the family estate to wolf in sheep’s clothing Mr. Wilkins (Colin Firth).

Remember when “The Muppets” featured oil tycoon Tex Richman as the villain? They’re at it again with shady money men. It’s all part of Disney’s ongoing scheme to present itself as the underdog and not the media dynasty that once tried (rather recently) to strong-arm the Los Angeles Times over unfavorable coverage (may watchdog reporters never forget).

But hey, Blunt is an insane delight. Plus, Marvel, “Star Wars” and all the rest of our favorite things are now controlled by the mouse.

As for the music, I wish I could be more optimistic. It’s entirely functional, but lacks the flair of “Supercalifragilisticexpialidocious” and “A Spoonful of Sugar.” Frankly, it’s a bit too reminiscent of “Into the Woods,” and yes, that’s a dig on one of Broadway’s blandest shows. New entry “Can You Imagine That?” is quaint, but more B team than A-list worthy. As for the rest, we’ve all heard much better. And yet again, I’m required to pretend Meryl Streep can sing. No thanks. It was painful in both “Mamma Mias” and unremarkable in “Into the Woods.”

Alas, this is a larger problem with contemporary cinema, becoming even more reliant on temp music (replicating music from other films) and generic audio cues. We learned nothing from the golden age of musicals or iconic John Williams’ scores. And so the orchestra, even during grand musical numbers, remains in the background, substantially cranked down. The goal is to feature voices and, perhaps more importantly, accent lavish computer effects ($130 million budget worth). What a tragedy, and an unexpected one from a director on his fourth musical film.

To be honest, director Rob Marshall never quite surpassed his freshmen entry, “Chicago,” where he captured what makes musicals such wonderful, bombastic spectacles. Since then, his approach is more tame: minimal choreography and music so low the stars’ voices can clearly (perhaps too clearly) be heard. Anyone who suffers through “Nine” should be compensated. It’s like he’s never been to a concert.

At least the effects are rather splendid, a mix of straight CGI and some kickbacks to 2D illustration. But that can’t make up for how procedural everything feels. Big is the new norm, catchy is the continual goal. It’s all fine, watchable, but hardly out of this world.

Breakfast at The Henry