Kramer named ‘Trailblazer of the Mile’

Twenty years ago, the Miracle Mile was far less vibrant than it is today. Aside from Museum Row, there were few attractions along the stretch of Wilshire Boulevard between Highland and Fairfax avenues. 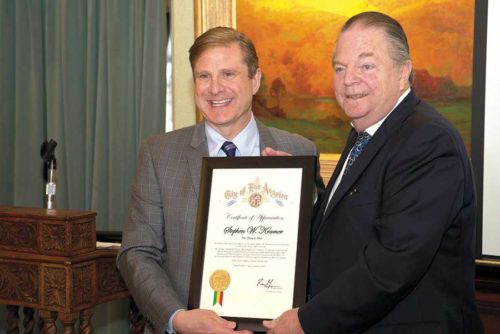 Fast forward to 2019, and the area is in a state of transition and growth. The Petersen Automotive Museum has been redesigned, the Academy Museum is under construction and the Los Angeles County Museum of Art is preparing for a dramatic transformation. Numerous housing projects and buildings have also changed the landscape, new restaurants and shops have opened, and Metro’s Purple Line Extension subway project is poised to bring new transportation options to the area when it opens in 2023.

Much of the change has been driven by the people who call the Miracle Mile home, including attorney Stephen W. Kramer, who founded the Greater Miracle Mile Chamber of Commerce 20 years ago with a handful of small business owners. On Jan. 10, Kramer received the chamber’s Trailblazer Award, which recognizes people who have made an impact on the success of the Miracle Mile. Kramer received the award before a capacity crowd at the Ebell of Los Angeles. Speakers included Los Angeles City Attorney Mike Feuer and City Controller Ron Galperin, as well as many people from the business community who have helped the chamber grow or benefitted from Kramer’s guidance.

Feuer told a story about how two months before the primary election for city attorney in 2013, he was seriously injured in a car accident. Knowing Feuer could use help and there wasn’t much time before the election, Kramer organized an effort to make calls and rally voters to support the city attorney candidate.

“I will never forget that, because it was not a political act, it was the act of a true mensch,” Feuer said. “Steve, on behalf of the city attorney’s office, but also very personally on my behalf … thank you. At a moment when nationally things are so divisive, this chamber has contributed to what makes L.A. a cohesive, unified antidote to that condition. We need each other, and we need everybody to be a leader like Steve Kramer.”

Kramer said he was honored to be recognized as a trailblazer for the Miracle Mile and the surrounding community. He also served 10 years on the Mid City West Community Council and helped start Tarfest, an annual celebration of music and art that celebrated its 16th anniversary last September.

“I was touched,” Kramer said about receiving the Trailblazer Award. “I was taken aback when I looked at who was speaking and the things they were saying. I was very proud.”

“It immediately became clear that involving people in the Miracle Mile community was a way to generate business,” Kramer said. “Looking back, there were a lot of empty storefronts. Now, we have hundreds of units of housing on the Miracle Mile that didn’t exist. You drive down here on a Saturday or Sunday and there are people on the street. As the subway approaches and with the construction of new cultural institutions reaching conclusion, it’s going to be even more of a draw.”

Kramer also credited the chamber’s executive director, Meg McComb, with helping the chamber grow. Over the past five years, it has expanded from 50 to 125 members. The scope of the chamber’s influence and programming has also grown. It hosts an annual economic forum and has forged many relationships at Los Angeles City Hall.

“Our relationships with elected officials are very strong,” Kramer added. “We are very fortunate the chamber has access to politicians. That access doesn’t necessarily give you what you want, but it gives you the opportunity to be heard.”

Kramer also said the future looks bright for the chamber and the Miracle Mile, and he plans to make the organization even more pertinent and beneficial to members in the future. Aside from monthly membership meetings for networking, the chamber now hosts social hours and attracts speakers from a diverse array of fields.

“I look forward to continued growth, continued programming and more activities,” Kramer added. “I am very proud of what we have accomplished. I think the chamber is in a good place to move forward.”