Japan House Los Angeles presents “This is Manga – The Art of Naoki Urasawa,” a free exhibition by the internationally acclaimed Japanese manga artist Urasawa, now on view through March 28. 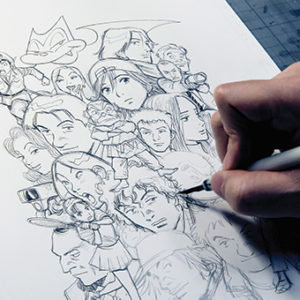 Learn about the Japanese comic style known as manga, which is a fusion of story and artwork evolving from picture book styles developed in the late 19th century, at Japan House Los Angeles. (photo © Naoki URASAWA / Studio Nuts)

The retrospective exhibition will showcase more than 400 of Urasawa’s original drawings and storyboards, selected stories from seven of his major works, and deliver four consecutive stories of the “Yawara!” manga series every other week, replicating the weekly serial style of many Japanese comic anthologies.

Selling over 127 million copies in Japan alone, Urasawa’s dynamic storytelling has also captivated a global audience, with his works published in more than 20 countries. The award-winning artist continues to garner international popularity through collaborations, including his recent work with the “Mujirushi” manga at the Louvre Museum.

Since his professional debut in 1983, Urasawa has pushed the limits of the manga medium, engaging readers with innovative compositional techniques and drawing as he creates works that are both introspective and philosophical. His stories touch upon the hopes, dreams and underlying fears of humanity.

The exhibition introduces manga, a Japanese comic style, and explores Urasawa’s artwork, including his original hand-drawn storyboards, from inception through development. To complement the North American debut of the exhibition, Japan House will offer interactive drawing workshops for all ages with Los Angeles-based animator and illustrator MinoMiyabi.

Chris Thile hosts eclectic evening of music at The Wiltern