Heart of Hollywood readies for close-up

More pedestrian safety enhancements, bridge housing to address the homeless crisis and a few encouraging crime statistics were some of the highlights Los Angeles City Councilman Mitch O’Farrell mentioned at the annual State of Hollywood address on Jan. 17. 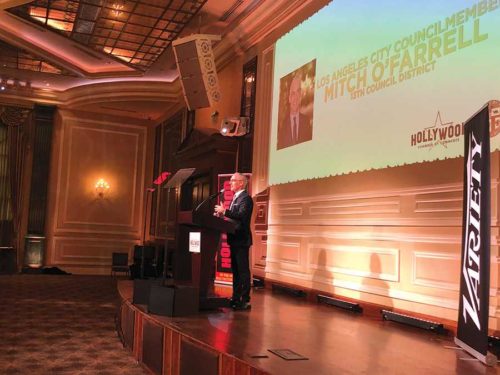 “This vision process in and of itself will lead to the kind of exciting change this community has been longing for,” O’Farrell, 13th District, said at the annual event, held at the Taglyan Complex on Vine Street and hosted by the Hollywood Chamber of Commerce.

Part of that process includes making the streets safer for the residents, visitors and business owners who walk, and cross, the streets of Hollywood every day. Hollywood Boulevard, from North Martel Avenue to Barnsdall Art Park, is part of the high injury network of roads throughout the city that have caused severe injuries and death.

Following the first scramble crosswalk in the neighborhood at Hollywood Boulevard and Highland Avenue, the boulevard welcomed another at the corner of Hollywood and Vine. Bicyclists and walkers account for 44 percent of people killed or severely injured while traveling around the city, but only 19 percent of local travelers use walking or biking as their primary mode of transportation.

“Pedestrian safety continues to be my No. 1 traffic priority,” O’Farrell said. “[For] thousands of students at the Musicians Institute, Hollywood High, Selma Avenue Elementary and everyone else – stopping cars completely is the best way to reduce the city’s hit-and-run epidemic.”

LAPD Hollywood Division has also made the neighborhood safer in some areas, including a 26.1 percent reduction in rape, even though the number of violent crimes was the same in 2018 as it was in 2017, when it jumped 10 percent from 2016. The number of property crimes in 2018 also remained the same compared to 2017. There was a 10 percent increase in burglaries and 13 percent increase in personal and other thefts, negating decreases in motor vehicle theft, which dropped 12 percent, and theft from motor vehicles, which dropped 10 percent. O’Farrell mentioned 51 guns that the Hollywood Division took off the streets.

“We’ll never be able to quantify the tragedies prevented because the LAPD recovered 51 guns,” he said.

And with another homeless count underway, O’Farrell said he’s hoping to see another decrease in the 13th Council District’s homeless population. The 2018 homeless count showed a 10 percent decrease in the district from 2017, but it still ranked third highest among L.A.’s 15 council districts. A bridge housing shelter on Schrader Boulevard in Hollywood is nearly complete as part of an initiative by Mayor Eric Garcetti to add bridge housing in each council district.

“We’re in the midst of some successes that speak to this issue,” O’Farrell said. “The bridge home program here has been a real winner.”

Dan Halden, O’Farrell’s longtime Hollywood field deputy, began serving as Heart of Hollywood’s director on Dec. 1. O’Farrell said the initiative will begin to target the long vacant buildings on Hollywood Boulevard to help bring “a sparkle” back to the street.

“We will undoubtedly face challenges in the future, but all the while I will continue on a steady path to make the most of my time in this office to ensure that Hollywood takes a big leap forward,” O’Farrell said. “In Hollywood, we do big things. In my office, we produce.”