‘Glass’ is watchable until it insults loyal fans

M. Night Shyamalan has never been more Shyamalan in the latest Shyamalan flick with his signature Shyamalan twist. Sadly, like too many Shyamalanian thrillers, he Shyamalans all over this one. And so “Glass” becomes yet another convoluted attempt at high art that spends so much time justifying its premise that a story arrives only after a sea of expository dialogue, catch-up for the uninitiated viewer. 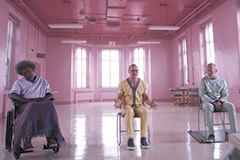 Spoiler if you haven’t seen “Split”: the 2016 horror flick about a serial killer, Kevin (James McAvoy), with multiple personalities, is a loose sequel to 2000’s “Unbreakable” in which David Dunn (Bruce Willis) learns he’s a superhero endowed with special abilities following a tragic train crash. Spoiler for that film: comics art curator Elijah Price (Samuel L. Jackson) so passionately believes comic books tap into an exaggerate universal truth about the superheroes who walk among us unnoticed that he staged three catastrophes in search of a lone survivor.

Whelp, a lot of time has passed. Price remains in a psychiatric facility, unclear what his purpose in the world is now. Dunn, however, continues to do fate’s work. Dubbed the Overseer, he tries to keep folks safe, even when he confronts the Beast, Kevin’s personality that is both inhumanly strong and bullet proof.

That’s the story super fans want: a satisfying showdown between opposing forces. That kinda occurs, following several sessions with Dr. Ellie Staple (Sarah Paulson), who’s hellbent on convincing them all they suffer from superheroic delusions. Frankly, she sucks at her job, overly monologuing about their perceived conditions and how frivolous comics are (clearly she missed Tuesday’s announcement that “Black Panther” is up for best pic).

“Glass” is a long overdue sequel. Very overdue, like a decade too late. And M. Night must not think too highly of the fandom surrounding “Unbreakable” since he transforms the main trio from characters into tools, pawns more precisely, in a much larger game. To a degree, the film’s premise is clever, providing ample commentary on superhero media. But it’s all a middle finger to David, Kevin and Price, who goes by Mr. Glass, his self-appointed supervillain name. This is far too clear during a story more interested in those larger philosophical questions, not the characters at hand.

The film’s general failure is all hardly surprising. The eternal Hitchcockian disciple, still cameoing in all his own films, Shyamalan attempts to thwart expectations, sometimes to great success (“The Sixth Sense,” “Signs”). But this is also the man who perverted “Avatar: The Last Airbender” with his crude interpretation – a film so bad it killed a planned trilogy (luckily, the original showrunners are back in charge for a forthcoming Netflix series).

From “The Happening” to “After Earth,” he knows his way around some duds. But “Split” was a surprising return to form, something far more enjoyable than it should be considering McAvoy’s outlandish performance. Even “The Visit” marked an upward turn.

To degrees, McAvoy’s Kevin and Jackson’s Price are handled rather well, or at least better than Willis’ Dunn, a character underused for the sake of an expanding universe. That’s on brand with current superhero and sci-fi filmmaking. But plenty of other franchises more successfully plan for the future, acknowledge characters’ role in a grander narrative without sacrificing the story at hand.

This should be a groundbreaking superhero film both as a piece of smart commentary and an enjoyable film in its own right. But sloppy writing that poorly jumps around and meanders takes hold. But fear not. “Glass” is not alone. It joins a long tradition of trilogies that fizzle out by the third installment. “The Godfather,” the first “Spider-Man” trilogy, “Alien,” “X-Men” (twice) and now this one.

Certainly, Shyamalan doesn’t see it that way. He doesn’t seem to hold critics in high regard, especially considering the film critic from “Lady in the Water” who dies merely for criticizing cliché writing, something Shyamalan too often champions. So here we are, and another bougie critic must chastise a director for betraying the viewers who now have to rewatch two actually fun films, “Unbreakable” and “Split,” with the taint of this ending overshadowing them. If only he had a writing partner. If only he had an editing team. If only he found a way to tell a complex story that cared.