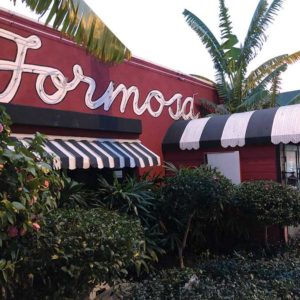 The Formosa Cafe is one of the most famous relics of a bygone Hollywood era. Under new ownership, it will reopen this spring. (photo by Luke Harold)

“The iconic Formosa Cafe on Historic Route 66 played an important role in West Hollywood’s commercial development, especially in the growing film industry,” said Victor Omelczenko, board president of the nonprofit West Hollywood Preservation Alliance. “We’re happy to have the preservation year start off on such a fine note. Now, it’s up to the City Council to give its official approval.”

The Formosa, frequented over the years by singers, actors and mobsters during Hollywood’s Golden Age, closed suddenly in December 2016. There was some uncertainty about the building’s fate until 1933 Group, a hospitality company that specializes in renovating and reopening historic venues, secured a lease in spring 2017. The company has been working to restore the cafe, with a targeted late April or early May reopening. A spokeswoman for 1933 Group said the founders have been grateful for the support they’ve received from the community, including the nonprofit Los Angeles Conservancy.

Several key details of Formosa’s origins have been lost to history. Its architect and builder are unknown, according to the city of West Hollywood’s historic preservation records. The construction date is estimated between 1920-29. Located near a few major studios, the Formosa counted Elvis, John Wayne, Marilyn Monroe and Frank Sinatra among its regulars. Christopher Lloyd and John Cusack, who advocated for landmark designation when the cafe faced the threat of demolition in the early 1990s, were two of the Formosa’s contemporary regulars. It has also made several memorable cameo appearances in “L.A. Confidential” and other movies and TV shows.

The interior was renovated in mid-2015, a little more than one year before the Formosa closed. 1933 Group is working with the grandson of former owner Lem Quon to decorate the new Formosa with the same autographed celebrity photos and other artifacts that used to be on display, and the menu will have a “modern twist” on the Mongolian beef, Beijing chicken and other favorite dishes from the past.

A total of 762 places in West Hollywood have been designated as cultural resources, including 15 that have a national designation.

“[West Hollywood Preservation Alliance] believes the Formosa may be also historic on both a state and national level,” said Roy Oldenkamp, one of the organization’s board members. “We are additionally encouraged to see the [Historic Preservation Commission] put forth the request for a city nomination and hope more recognition of the Formosa Cafe will follow in the near future.”

Garcetti announces he will not seek White House

[…] especially in the growing film industry,” WHPA board president Victor Omelczenko told the Beverly Press after the West Hollywood Historic Preservation Commission voted to recommend that the nearly […]