Explore volcanoes around the world at the Science Center

“Volcanoes 3D: The Fires of Creation,” blasts into the California Science Center IMAX theater on Jan. 21. 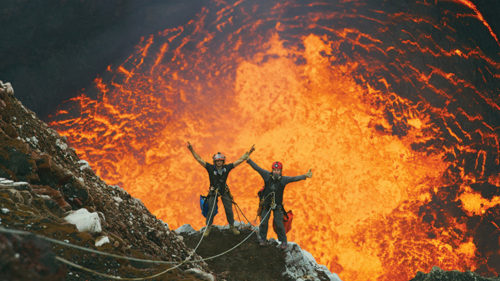 The California Science Center’s new film “Volcanoes 3D” takes audiences into a boiling lava lake, down hydrothermal vents at the bottom of the ocean, to an active volcano and more. (photo courtesy of Boutique Publicity)

Guests are invited to join intrepid explorer Carsten Peter as he dodges boulders at the edge of an active volcano in Indonesia, descends to a boiling lava lake in Vanuatu, and visits incredible acid ponds, geysers and mineral deposit fields in Ethiopia. Peter also explored the archeological ghost town of Pompeii, hydrothermal vents at the bottom of the ocean and witnessed the devastating effects of the 2018 Kilauea eruption in Hawaii.

“‘Volcanoes 3D’ offers the closest possible approximation to experiencing an eruption, or descending into a volcano, while remaining safe,” said California Science Center President Jeff Rudolph. “We are thrilled to show our audiences the incredible power of volcanoes, as they learn about the ways volcanic activity has shaped and affected our world.”

With over 500 active volcanoes, Earth is bursting at the seams with these forces of mass construction. The story of volcanoes is the story of the planet’s creation.

“We often think of volcanoes as being destructive, but they also build and play a beneficial role on the planet. There are dozens of volcanoes erupting each day from the bottom of the ocean to mountain peaks. To witness one in action is both beautiful and awe-inspiring,” said Michael Dalton-Smith, director and producer of “Volcanoes 3D.” “Most importantly, I hope that the audience will come away with a better understanding of the forces that shaped the world we know today.”

Watch the trailer at volcanoesfilm.com. IMAX tickets start at $6.75.

The California Science Center is located at 700 Exposition Park Drive. For information and tickets, visit californiasciencecenter.org.