Losing a leg in a traffic accident could end a career in many professions, particularly law enforcement, which requires personnel to meet the physical rigors of the job. 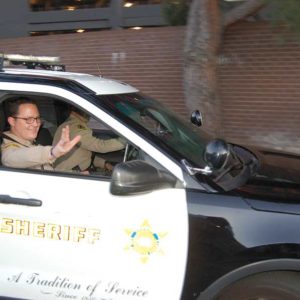 But West Hollywood deputy Garrett Rifkin, a five-year sheriff’s department veteran with two years serving locally, wouldn’t let a life-altering injury put him on the sidelines. Five months after having his left leg amputated below the knee, he returned to the station on Dec. 27, beating the odds in an unlikely comeback.

“I didn’t really expect to get back until around June. But the doctor cleared me … and I am back to work,” Rifkin said. “The last four months have been a trial process. I have had a lot of interesting experiences I never thought I would have to endure. A lot of falling, a lot of getting back up. It’s been different.”

On Aug. 3, Rifkin, 25, was riding his motorcycle to work on Fountain Avenue when he was struck by a hit-run driver who ran a stop sign heading northbound on Formosa. The collision put him in the hospital with major injuries and forced him to make a life-changing decision. Rifkin’s doctors told him if he kept his leg, he would likely face a crippling injury for the rest of his life. With amputation, and a technologically advanced prosthesis, he had a shot at normal mobility, gait and agility. Rifkin said it was an easy decision. He has used a prosthetic leg for the past two months.

When Rifkin arrived at the station for his first shift back, he was anxious to get out on patrol. In a way, it was like starting his career in the field over again.

“The best feeling was setting up my car again for the first time. It felt good putting all my gear in the car, it felt good putting my vest on again for the first time. It’s been four months since I have even sat in a radio car,” Rifkin said. “It’s a good feeling. Pretty much from day one sitting in the hospital, my goal was to get back into a radio car.”

He added that his family, and extended law enforcement family at the sheriff’s station, helped him get through a difficult time. His goal was always to get back on the job, and to return more quickly than anticipated was an unexpected blessing. Rifkin underwent special physical therapy and training several times a week that enabled him to improve rapidly.

“Everybody has been super supportive throughout the entire process,” he said. “I haven’t felt alone in this thing since the day of the accident. They’ve supported me from Aug. 3 up until now. I couldn’t think of a better station to work at.”

Rifkin said while in the hospital he met officers from San Bernardino County and Bakersfield who are amputees and faced similar challenges. He said he had heard of two other amputees that formerly served in the sheriff’s department.

Capt. Sergio Aloma, commanding officer of the West Hollywood Sheriff’s Station, said he is proud of Rifkin and his ability to recover and return to service.

“He has been a huge inspiration to his co-workers and deputies and the professional staff here, and certainly me. We’ve been with him every step of the way,” Aloma said. “Really from day one he has had the determination and the work ethic to get back to work, to get back with his partners and get back to serving the community of West Hollywood. We’re excited to have him back.”

The hit-and-run driver who struck Rifkin was later arrested and convicted, and sentencing is pending in court. Rifkin said it was just one of the many hazards deputies face, on and off the job, and isn’t going to let his amputation diminish his enthusiasm or hinder his future.

“I think it’s going to be a different challenge now, but I am excited to do it. I have tried to meet this whole thing with a positive attitude, as positive as I could be,” Rifkin said. “I am just going to keep pushing forward and try to do the best I can.”

Street vendors could be coming to Beverly Hills