Chanting “this is what democracy looks like” and “whose House, our House,” approximately 50 demonstrators marched two blocks from U.S. Rep. Ted Lieu’s office at 5055 Wilshire Blvd. to U.S. Rep. Karen Bass’ office at 4929 Wilshire Blvd. on Jan. 3 to show support for Democratic lawmakers on the first day of the 2019 congressional session. 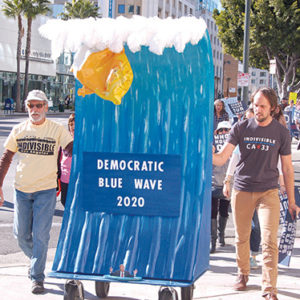 Demonstrators marched along Wilshire Boulevard near Highland Avenue on Jan. 3 to show support for Democratic leaders in Congress. (photo by Edwin Folven)

The demonstration was organized by Los Angeles-area members of Indivisible, a nationwide movement of regional groups that engage in progressive advocacy and support political campaigns. The demonstrators, primarily from the South Bay, which is in Lieu’s 33rd Congressional District, congratulated Lieu and Bass for their work in winning back the House of Representatives in the 2018 election. Duane Bindschadler, a Venice resident who organized the demonstration on behalf on Indivisible CA-33, said people must come together to start planning for the next presidential election.

“This was a planned event coinciding with other demonstrations outside the offices of lawmakers around the country. We wanted to say thank you and let our representatives know they have our support. It was coincidental because Ted Lieu’s office and Karen Bass’ office are so close,” Bindschadler said. “The goal is to move the progressive agenda forward in the House. It’s time to make a major change in how the government operates ahead of the general election in 2020.”

Patti Crane, an Indivisible member from Torrance, said in 2018, members organized rallies and campaigns in California areas considered congressional swing districts such as Orange County and parts of central California.

“After Trump’s election, we were like, ‘What are we going to do?’” Crane said. “We generated 5,000 hand-written cards over four months and mailed them to voters in 13 districts in support of candidates in places that may swing blue. We cannot go along with what’s happing in America right now. “

“Before the election, I thought maybe we would get six, but we went seven,” Liebman said, adding that there are many challenges ahead. “There are no experts in what has not happened yet and no one can tell us ours is a fool’s errand. Here is democracy. This is what it looks like.”

The Congress members thanked the group for its support.

“I have the best district in the country because it’s full of engaged, enthusiastic people who want to make our community, country and world a better place,” Lieu said. “It is the greatest honor of my life to represent California’s 33rd District in the House of Representatives. The Democratic majority is working on addressing pressing concerns like climate change, criminal justice reform and health care, and I look forward to elevating my constituents’ voices as we bring change to Washington.”

“These rallies are a local example of excitement that is being felt throughout the nation and I’m right there with them,” Bass said. “I’m ready for Congress to return to fighting for the people.”

Bindschadler said Indivisible is gearing up to be a major force in the 2020 election and there is much reason for optimism.

“Think back two years ago when we all thought we were lost in the GOP wilderness,” Bindschadler said. “Like many people, I saw the new administration as a threat to the future of America. Hundreds of thousands of people refused to accept that. To make a more just American government, we needed to stand up. We needed to rebuild the foundation of democracy.”

Proud to have been part of this rally to show our support for the new Democratically-controlled House! Confident they will bring more balance to our government and be a check on some of the insanity. Rock on, Blue Wave 2020!