The Los Angeles City Council approved a $1 billion mixed-use development on Sunset Boulevard east of Highland Avenue on Jan. 22 that will include nine new buildings, including three towers up to 31-stories tall. 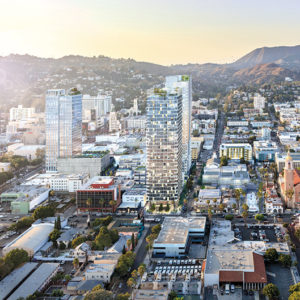 The Crossroads Hollywood project, approved by the City Council on Jan. 22, will bring apartments, commercial space and a new hotel to Hollywood while retaining the existing Crossroads of the World complex on Sunset Boulevard. (photo courtesy of Harridge Development Group)

The project, Crossroads Hollywood, will be built on the site of the Crossroads of the World complex, which would be retained in the new project, along with a nearby building on Sunset Boulevard that formerly served as the headquarters for The Hollywood Reporter. Harridge Development Group will build the project including 950 apartments, 308 hotel rooms and 190,000 square feet of commercial space. The apartments will include 105 units of affordable housing.

The tenants will have to find housing while the project is being built but will be allowed to return and live in either an affordable unit or a market-rate apartment at their current rent under the city’s Rent Stabilization Ordinance if they do not meet affordable housing requirements.

Councilman Mitch O’Farrell, 13th District, supported the Crossroads Hollywood project and brokered the arrangement for the residents at the Selma Las Palmas Apartments.

“My office worked to ensure the Crossroads project will positively benefit the heart of Hollywood: It will bring much needed affordable housing, including 105 very low income units, to the neighborhood; it creates good paying construction and permanent jobs to help the local economy; and we advocated on behalf of the current residential tenants on the property to have the right to return at their current rate as allowed by the Rent Stabilization Ordinance,” O’Farrell said in a statement. “In addition, we worked on a plan, which has been supported by the L.A. Conservancy, to save structures of historic importance in Hollywood. I look forward to breaking ground on this world-class project in the coming months.”

Opponents cited density, a lack of more affordable housing, the number of new venues selling alcohol and an increase in traffic the development will bring as reasons it will be bad for Hollywood. The project was heralded as being transit-oriented because it is within a couple blocks from the Hollywood and Highland Metro Red Line subway station, but some anticipate few people at the site will use public transportation.

“The city has been talking about transit-oriented development, but the ridership is less than it was 30 years ago,” said Casey Maddren, president of United Neighbors for Los Angeles, a grassroots organization opposing overdevelopment. “There are many aspects that we oppose.”