On the heels of multiple lawsuits against Beverly Hills Police Chief Sandra Spagnoli, local residents have launched a campaign seeking to oust her from the job.

Led by longtime resident and former Beverly Hills City Council candidate Vera Markowitz, the BHPD Crisis campaign has created a website, run advertisements and is generating support for Spagnoli’s removal. The chief and the city dispute the group’s claims that the police department is in crisis. To the contrary, their contention is the department is being reformed and changes are occurring that will make the city safer. 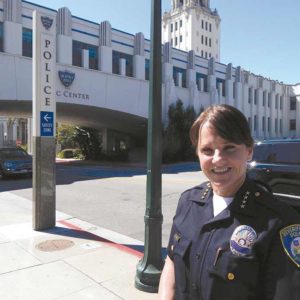 A campaign centering on complaints against the Beverly Hills Police Department and Chief Sandra Spagnoli alleges the department is in crisis. (photo by Edwin Folven)

Markowitz said she has long supported the police department and decided to launch the BHPD Crisis campaign to raise awareness about the more than 20 Beverly Hills Police Department employees who have filed lawsuits, including litigation resulting in a $2.3 million settlement paid by the city in December to a former captain.

Markowitz said she has the support of many current and former officers and other personnel in the Beverly Hills Police Department, as well as many residents. She declined to name supporters out of fear of retaliation from the police department and the city.

“Bottom line is, the goal is to get rid of the chief and the people around her. They should have gotten rid of her after the second lawsuit [was filed]. That was a huge indication,” Markowitz said. “I have had officers who have contacted me to tell me about issues in the department but they can’t be public. I am willing to be the face of the issue.”

In the lawsuit settled in December, former captain Mark Rosen, a 45-year department veteran, claimed he was denied promotions and discriminated against because of his age. Rosen, who is Jewish, also claimed he was subjected to anti-Semitic remarks.

The city settled the lawsuit on the advice of its insurance company, and no further explanation was given. Other pending lawsuits by Beverly Hills Police Department personnel contain similar allegations of discrimination.

The BHPD Crisis campaign alleges that the lawsuits are “the tip of the police department’s iceberg,” and that more litigation is expected. The campaign also alleges that morale is low, and trust and communication between employees has deteriorated. Markowitz and the campaign are calling for more transparency and for the City Council to examine problems and fix them.

The city is defending Spagnoli, who was hired in 2016, and the police department. Spagnoli released a videotaped message in response to the BHPD Crisis campaign, which she said contains “egregious statements and misrepresentations.”

“When I was hired in 2016, the City Council wanted a culture change in the police department, most notably to address lack of accountability, low staffing and low morale,” she said. “As a woman in the law enforcement profession and as the police department’s first female police chief, this work can certainly be challenging, especially in an environment where change is not welcome by some. As a recent independent review of our police department confirms, we are on the right track. There is not a crisis in the Beverly Hills Police Department, the morale of the department is strong and our new crime prevention techniques are making a difference.”

Beverly Hills spokesman Keith Sterling pointed to Spagnoli’s message as the city’s position on the campaign and the issues allegedly affecting the department. Requests to the police department for comment were directed to Sterling’s office.

The city hired Spagnoli in 2016 following a 2015 independent report by the Management Partners firm which analyzed law enforcement policies, hiring practices and disciplinary processes, and made recommendations for improvements. The city called for the analysis to improve the department overall, fill vacant positions and boost morale.

Spagnoli said implementing those recommendations are a key part of her work as chief. On Dec. 11, representatives from Management Partners reported to the City Council that much progress had been made. The firm interviewed 25 randomly-selected sworn and civilian department employees, and determined that the “overall organizational climate and morale in the department are good.”

Beverly Hills Mayor Julian Gold said he is “very disappointed by this vicious campaign against Chief Spagnoli and our police department.”

“Prior to the chief being recruited, an independent study confirmed the department was facing serious challenges. The chief was hired specifically to implement needed change and the success of that work can now be seen in our declining crime rate,” he said in a statement. “The City Council remains strongly supportive of the chief and her efforts to reform the Beverly Hills police department.”

“It’s very difficult for some people to deal with a female police chief,” he said. “There are also people who are being egged on because they see money. We live in a very litigious society. That’s not to say we don’t take a troublesome work environment very seriously, but there comes a point when people are trying to shake down the city. It smacks of political opportunism and support for an agenda.”

Markowitz said her only agenda is bettering the police department and improving public safety in Beverly Hills.

Heart of Hollywood readies for close-up

School is back in session for LAUSD