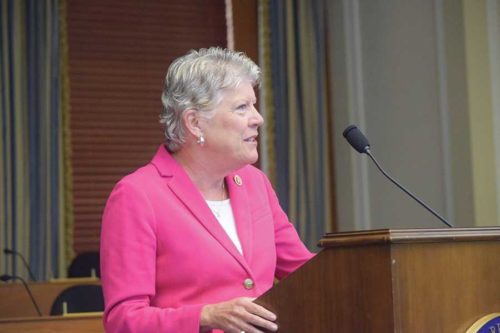 Brownley said the bills will give veterans “the resources they need to successfully transition into the job market.” (photo courtesy of U.S. Rep. Julia Brownley’s office)

“Our service members gain invaluable experience and technical skills during their time in uniform, and we need to do more to ensure that they can succeed in the 21st century economy,” Brownley said. “These bills will help our nation’s veterans have the resources they need to successfully transition into the job market and support themselves and their families. I look forward to working with my colleagues on both sides of the aisle to move these important bills through the legislative process.”

The Help Hire Our Heroes Act would restart the Veterans Retraining Assistance Program. The program started in 2012 to provide training assistance to unemployed veterans between the ages of 35-60 who are no longer eligible for the GI Bill. It provided up to 12 months of training benefits at community colleges and technical schools in occupations that the Department of Labor has identified as high demand.

During the 113th Congress, Brownley introduced legislation to keep the program going, but the Republican House refused to reauthorize the program. As a result of congressional inaction, the VA was forced to end the program. VA stopped accepting new applications after Oct. 1, 2013, and stopped paying benefits to enrolled veterans after March 31, 2014.

The Reduce Unemployment for Veterans of All Ages Act would lift the arbitrary 12-year time limit on when veterans with service-connected disabilities can participate in the VA’s Vocational Rehabilitation and Employment Program. This program helps veterans obtain employment through job training, employment accommodations, resume development, and skills coaching. In fiscal year 2017, 90 percent of veterans who achieved rehabilitation from an employment plan had a job in the prior year. Veterans who successfully completed the program also earned $18,000 more in individual income than those who did not complete the program. Brownley’s bill passed the House during the 115th Congress, but was not passed in the Senate.

This legislation is also supported by the American Legion, Disabled American Veterans, Paralyzed Veterans of America and Veterans of Foreign Wars.