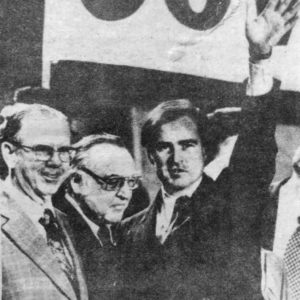 Former Gov. Jerry Brown waved to the crowd after being elected to his second term in office in this photograph from the Nov. 16, 1978, issue of the Park Labrea News. Brown was joined by then-Los Angeles County Supervisor Kenneth Hahn (left) and his father, former California Gov. Pat Brown, at an election night party in Los Angeles. Brown served his second term as governor through 1983, when he launched an unsuccessful campaign bid for state senator. He remained active in politics in the following years, launching a presidential election bid in 1992, serving as mayor of Oakland from 1999-2007, and as California Attorney General from 2007-11. Brown then returned to the governor’s office for two terms from 2011 through Monday, Jan. 3, when he was succeeded by new California Gov. Gavin Newsom.