The Beverly Hills City Council cleared the way for a zoning change to accommodate a new mixed-use project at the former site of the Friars Club on Santa Monica Boulevard, rejecting an appeal by the owners of the nearby Peninsula Hotel over traffic, noise and other potential adverse effects. 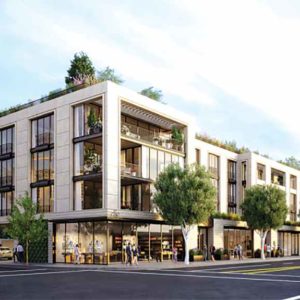 Beverly Hills’ general plan does not allow mixed-use projects, requiring the City Council to make a zoning amendment for the plot of land. (photo courtesy of the city of Beverly Hills)

The proposed four-story project would include 25 condominium units and 13,000 square feet of ground-floor retail space. The Beverly Hills general plan doesn’t currently allow for mixed-use projects, so the project requires a zoning amendment from the City Council. The applicant is 9908 Santa Monica Blvd., LLC, represented by Thomas S. Levyn, a registered legislative advocate. It was first filed in 2015.

During the council’s Jan. 8 meeting, the representatives of the applicant said they’ve followed the city’s feedback and completed the necessary revisions. But representatives from the Belvedere Hotel Group, which owns the Peninsula, filed an appeal to prevent the council from making an amendment to the general plan for this project. Planning commissioners were also in attendance.

“It’s an area that needs a facelift,” said Alan Block, one of five members on the city’s Planning Commission, which voted 3-2 to recommend approval of the project to the City Council.

Andy Licht, another member of the Planning Commission, said the proposed project is located in “a sleepy part of town [that] needs some pizzazz,” and it would add more options to the local housing supply.

“There aren’t many options in Beverly Hills other than beautiful homes,” he said. “This would be a great option.”

It also has implications for the identity of Beverly Hills.

“The proposed change in land use from commercial to mixed-use would result in lasting changes to the character of this existing commercial corridor,” read a report from the assistant director of community development. “In recent years it has become more common for cities in the Los Angeles region to revise zoning regulations to allow for buildings with street-level commercial and multifamily housing on floors above. Some neighboring cities, such as West Hollywood, Los Angeles, Santa Monica and Culver City have rezoned commercial corridors to allow for this typology of building.”

The City Council voted 4-1 to affirm the Planning Commission’s recommendation. Vice Mayor John Mirisch was the only vote against it.

“It kind of sends a message that there’s no zoning, it’s all about money,” he said.

The project has undergone multiple revisions since it was first introduced as a five-story building comprising 27 residential condominiums and no retail. In September, the design was modified to eliminate the fifth floor, making it a four-story project, and the height was reduced to 47 feet from the ground to the roof-deck.

The Friars Club building that used to stand at 9908 Santa Monica Blvd., designed by architect Sidney Eisenshtat, closed in 2008, according to the nonprofit Los Angeles Conservancy, after last operating as Club 9900. A 2006 survey of commercial structures in Beverly Hills said the building was eligible for the California Register of Historical Resources based, but it was demolished in 2011.

Councilman Robert Wunderlich said it “would add vibrancy,” and Mayor Julian Gold called its approval a “unique moment in the history of the city.”

“It’s an opportunity for us to be proactive and finally plan,” Councilwoman Lili Bosse said. “ … We have the chance to imagine and create a revitalized gateway to our beautiful city.”

Third time might be the charm for 4 a.m. bar bill