Police on Jan. 2 announced an arrest of a suspect in a series of burglaries in 2017-18 at homes belonging to celebrities and others in the Hollywood Hills. Authorities also asked for help identifying approximately 2,000 items recovered that police believe are stolen property. 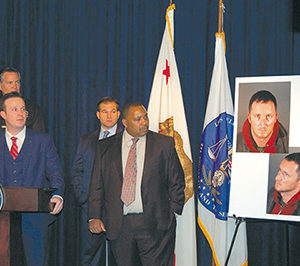 Hollywood Division investigators announced the arrest of Benjamin Eitan Ackerman for alleged involvement in burglaries at homes in the Hollywood Hills. The owners of property valued at millions of dollars have not been identified. (photo by Edwin Folven)

The suspect, Benjamin Eitan Ackerman, 32, was identified after a July 22 burglary at an undisclosed location in the Hollywood Hills. Authorities believe he is involved with 13 break-ins and was likely working with other individuals who are part of a burglary crew. Ackerman was arrested in September. Police were developing leads and investigating the case, and didn’t announce the arrest until Jan. 2.

“Hollywood burglary detectives following up on investigative leads identified a person of interest in one of those cases,” said Capt. Corey Palka, commanding officer of the LAPD’s Hollywood Division. “Detectives served a search warrant on Ackerman’s home and a storage unit [in September] to look for stolen property and additional evidence linking him to the burglaries. The execution of the search warrant led not only to the arrest of Ackerman, but also to the recovery of more than 2,000 high-end items, which include stolen art, clothing, purses, jewelry, fine wine and other very expensive items.”

Most of the homes targeted were in the process of being sold. Ackerman is believed to have visited the locations and posed as a real estate agent or broker. The homes belonged to celebrities such as Usher, Adam Lambert and Jason Derulo. However, not all the alleged victims were celebrities, as Ackerman is believed to have been involved in one burglary at the home of a family friend.

Det. Jared Timmons said the property is valued at millions of dollars. The investigation is ongoing, and it is unclear whether Ackerman may have been involved in other recent high-profile burglaries at celebrities’ homes. Detectives are also trying to determine who may have been involved in the burglaries with Ackerman. The suspect was identified using evidence from an open house he attended.

“We had noticed that he signed into the open houses on several occasions. In one instance, he was also a person inquiring into some rare art,” Timmons said. “We followed up on those leads, did some surveillance, developed probable cause and executed the search warrants.”

Timmons said the suspect’s charm allowed him to gain access to high-end homes for sale. Ackerman didn’t raise red flags because he appeared professional. Detectives believe he took note of property inside the homes and planned to later commit the burglaries.

“[It was] the fact that people didn’t challenge him,” Timmons said. “When he showed up, he was dressed to the nines. He acted the part, he was very slick.”

Timmons said the suspect has a criminal history but declined to elaborate because of the ongoing investigation. A primary goal now is to find the owners of the alleged stolen property, which police hope will link him to specific crimes.

People who may be victims are asked to visit hollywoodburglary.smugmug.com. Detectives would like to speak with anyone who has purchased property from or done business with Ackerman. The suspect may have sold some stolen property in Southern California and areas throughout the United States. Detectives discovered evidence that Ackerman regularly travels to New York.