Alfonso Cuarón is our generation’s most undefinable auteur, a cinematic author whose work refuses to be confined. From “Harry Potter and the Prisoner of Azkaban” and “Children of Men” to “Gravity” and now “Roma,” a Spanish-language film set in 1970s Mexico City, his work is transcendent. Be warned, this one might wreck you. 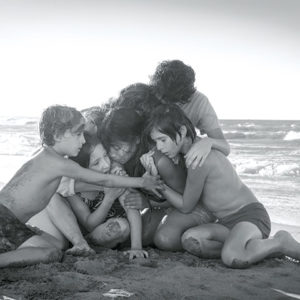 Cleo (Yalitza Aparicio) is surrounded by the family she serves in “Roma.” (photo courtesy of Netflix)

Cuarón loves a simple premise. Cleo (played by newcomer Yalitza Aparicio) is a live-in maid for an affluent family with their own baggage: an absentee father, a rather aloof wife and mother (Marina de Tavira) and four children Cleo adores. She tries to have her own life too: meets a guy, things snowball from there. Meanwhile, the city of Cuarón’s own youth is in transition, and a slow-panning camera catches quite a bit.

Shaming everyone else out there, Cuarón doesn’t just direct. For “Roma,” he’s the screenwriter, the editor, a producer and even the cinematographer. He’s known for working with incredible talent, but this is his theatrical debut in the latter role. His last cinematography credit was a made-for-TV film 28 years ago.

So does his maiden voyage behind the camera hold up? Extremely well. He mimics the inventive movements employed in “Y Tu Mamá También,” characterized by a meandering camera that leaves protagonists behind to canvass a landscape rich with history. That’s a rather common thread throughout all his film. He rarely prioritizes the main plot, which often functions as a red herring, hiding a rich subtext easily ignored. 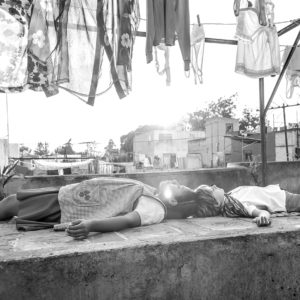 He fancies any story about cultural change. Even “Roma” peppers the story with Mexico’s role in the global community, though he spends most of his time on class differences. Cleo is a compelling character for this exploration. Rather than give us a maid with a high IQ or an amazing singing voice that must be discovered, she is compelling for no other reason than her humanity. That should be enough to drive any story. Western cinema certainly fetishizes the need for individuality. But Cleo is normal amidst an abnormal city.

Her trials are not unique, but they are still gut wrenching. The monotony of her daily routine is not a sign of weak writing but rhetorical device emphasizing just what life was like almost 50 years ago for a large population of another country. And considering how the film starts, the last 40 minutes are impossible to prepare for. Traumatizing is the only word that comes to mind, and unexpectedly so. You’ve been warned.

Now for the tedious part. Average filmgoers are sure to deem “Roma” boring. Perish the thought. Consider an alternative: films are not always meant to entertain in the same way. Some films require patience and an appreciation for the film medium. Isn’t that the basis for art museums? Apply that mentality to film, and what can result is not boring but different. Don’t miss out on beautiful art because it’s challenging, especially considering the director already proved with “Gravity” he can pick up the pace if he wants.

This is the clear winner for foreign language film awards in the near future. Sure, critics might like the idea of Bradley Cooper as the best director for “A Star is Born,” but Cuarón is the only one worthy of this honor. He wears the hats of many different departments without dropping the ball.

“Roma” is the cinematic equivalent to a great piece of literature, laced with symbolism, ambiguous sequences and a series of moments that flat out don’t add up without a second viewing accompanied by a glass of merlot. That’s what good art does: it sticks with you. It needs to be unpacked and debated. And Alfonso Cuarón is king of cinema that will outlast us all.