A new Sprouts Market is scheduled to open this spring on Santa Monica Boulevard at the former site of the long-closed Athletic Club West Hollywood. 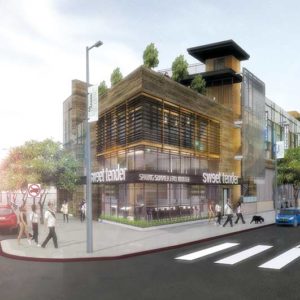 The project at 8550 Santa Monica Blvd. near West Knoll Drive will have a Sprouts Market, office space and café. It is expected to help reenergize the south side of the boulevard. (rendering by DLR Group)

The three-story project at 8550 Santa Monica Blvd. will include 25,000 square feet of space for a Sprouts Market and 1,500 square feet for a café with outdoor dining. Also included is a 16,000-square-foot space for The Wing, a New York-based co-working firm for women. That will offer conference space, booths, showers and areas for networking. The nearly completed project will also include rooftop parking and spaces in an adjacent, pre-existing garage.

West Hollywood Senior Planner Jennifer Alkire said the project was approved in 2015 and construction has been taking place for months. The city’s Planning Commission approved the project and it did not require City Council approval because there were no appeals or significant opposition, said West Hollywood Mayor John Duran. He believes the new development will help revitalize the south side of Santa Monica Boulevard near West Knoll Drive.

“That’s the site of my old gym,” added Duran, who said the Athletic Club West Hollywood was popular in the 1990s. “It was vacant for a long time.”

The former gym was demolished in 2010 and the Palms Bar, which was partially located on the site, closed in 2013 and was demolished later that year, according to a city staff report. The site is being developed by investor Michael Talla with design and engineering by DLR Group.

The building features a contemporary exterior design that complements the pedestrian environment and the scale of the street, according to information provided by DLR Group. Exterior materials include board-form concrete, metal rain screens and custom metal fabrications. Planters will filter rain water from the upper exterior levels and vertical landscape green screens will complement the building’s exterior. The project also uses high-efficiency buildings systems and water efficient landscaping to reduce energy and water usage.

Alkire said a permit for alcohol sales in the market is pending. Duran added that he is optimistic about the new project.

“It’s going to be an enormous benefit for the neighborhood,” Duran said. “This should be an exciting new site for the Santa Monica Boulevard community.”

Security guard pleads not guilty in shooting of man at Walgreens