Thousands of children received holiday gifts on Dec. 8 during the LAPD Hollywood Division’s annual toy giveaway, an event dating back at least 20 years in which police collect donations and distribute toys to needy families. 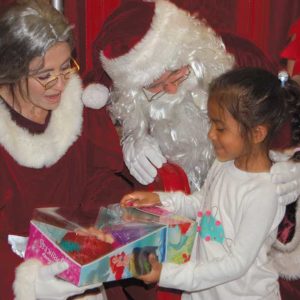 The toys were purchased with approximately $22,000 from anonymous community donors and police personnel. Hollywood Division Officer Paul Jordan, dressed as Santa Claus, welcomed children and handed out gifts. Jordan’s wife and daughter appeared as Mrs. Claus and Santa’s helper, and the children posed for photos in a festively-decorated room.

The giveaway makes a big difference for families with limited incomes, said Sgt. Darrell Davis, who oversees the division’s community relations office and organized the event.

“We have about 3,000 kids come through,” Davis said. “They are pre-selected at different elementary and middle schools throughout the area and given a ticket to the giveaway. All of this is to help people in need, show goodwill and build partnerships in the community.”

The students were from Le Conte Middle School, and Van Ness and Bancroft elementary schools, among others. Davis said on the evening before the giveaway, officers brought six homeless families to the station to select toys for their children.

“I can tell you among the officers here, there wasn’t a dry eye among them,” Davis said. “Just looking at the kids’ faces and seeing those families struggling was very emotional. That’s why we do this job.”

Families who accompanied the 3,000 students were also very grateful.

“It means a lot that the kids can have these gifts,” said Hollywood resident Alma Palomeque, speaking through a translator. “It’s especially nice because they get to take a picture with Santa, which can be very expensive somewhere else.”

Palomeque brought her two daughters ages 1 and 2 to the giveaway.

“Thank you very much,” she told the officers while fighting back tears.

LAPD administrators also welcomed the families and oversaw the giveaway.

“This is what it’s all about, giving back to the community,” said Commander Robert Marino, who heads the LAPD’s West Bureau. “The Hollywood personnel are really doing a great job. The kids have an opportunity to meet Santa Claus and get a present. Hollywood does this every year in a community-building partnership.”

“This is what the holidays are all about,” Ryu said. “When there is so much divisiveness in the nation today, it’s beautiful to reflect on the spirit of the holidays with the community coming together and bringing gifts to families and children.”