Students at Selma Avenue Elementary School received a special treat on Dec. 14 when officers from the LAPD’s Metropolitan Division’s A Platoon arrived on campus with Santa Claus for an annual holiday toy giveaway. 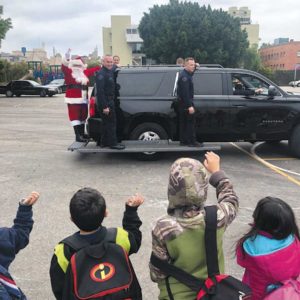 To a casual observer, it may have seemed like an ominous situation, with dozens of police cars pulling up to the campus one block south of Hollywood Boulevard and a helicopter circling overhead. But for the students, it was a day to remember as officers delivered hundreds of presents and Santa Claus (Officer Armando Hoyas) arrived on the back of a special police SUV to help the children get into the holiday spirit.

“It’s a way to give back to the community and show our appreciation,” said Officer Dana Oviatt, who has organized the event for the past eight years. “We are told that a lot of these families don’t have a lot of money for presents so we do our part to make sure they have a nice holiday. One by one, the classes come in and see Santa.”

The LAPD’s Metropolitan Division is a centralized tactical unit supporting crime suppression efforts throughout the city. The division is frequently deployed to assist personnel in individual police divisions and for special events, and bolsters departmental ranks when situations require crowd control or civil unrest occurs. The division also includes the LAPD’s SWAT teams. The A Platoon is deployed when dignitaries visit Los Angeles and for other special assignments.

Oviatt said Selma Avenue Elementary School was selected for the toy giveaway because the Metropolitan Division uses the campus as a staging area when officers are deployed in Hollywood. He added that the most high-profile deployment in the local area occurs each year at the start of the holiday season when officers provide extra security at the Hollywood Christmas Parade.

Approximately 125 children in pre-kindergarten through fifth grade received presents. Oviatt said that approximately 60 officers bought the presents with their own money.

“We really enjoy giving back to the kids,” Oviatt added. “It’s a special thing we do every year.”

Sunset and Gordon tower gets new lease on life