The rain on Dec. 6 caused some problems in the Hancock Park and Miracle Mile areas. 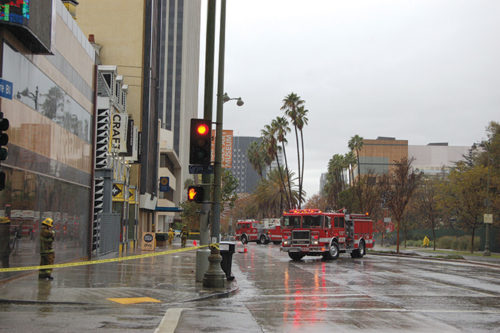 Firefighters cordoned of the eastbound lanes of Wilshire Boulevard while they searched for the source of a possible underground electrical explosion. (photo by Edwin Folven)

Los Angeles Fire Department spokeswoman Amy Bastman said the department received reports about a possible undergound explosion in the 5800 block of Wilshire Boulevard at 12:15 p.m. Firefighters cordoned off lanes on the south side of Wilshire Boulevard between Spaulding and Curson avenues while they searched the area. Bastman said firefighters found a manhole that was dislodged but there was no fire or smoke. The situation was believed to have been caused by an underground electrical problem and the fire department notified the Los Angeles Department of Water and Power. Excessive water may have been a factor but the cause remains under investigation and there was no power outage.

Additionally, a small tree fell near a parked vehicle on Rossmore Avenue, just north of Wilshire Boulevard. The top of the tree struck the front of the Mercedes Benz SUV, but the vehicle appeared to have sustained only minor damage. 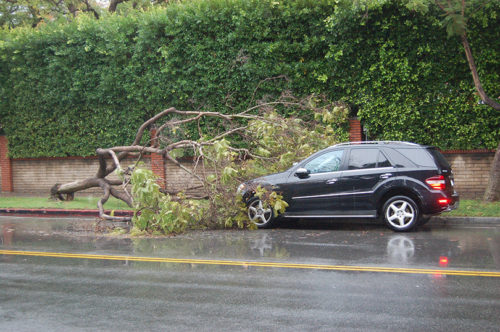 A tree fell on Rossmore Avenue north of Wilshire Boulevard, and some of the branches struck the front of a parked car. (Photo by Edwin Folven)