Observatory welcomes the beginning of winter

To mark the end of fall and beginning of winter, the Griffith Observatory is celebrating the winter solstice on Friday, Dec. 21, at noon in the Gottlieb Transit Corridor, and at 4:48 p.m. on the West Terrace. 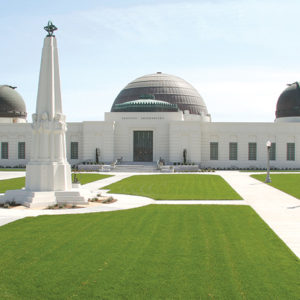 Dec. 21 is the shortest day of the year (nine hours and 53 minutes) and the longest night of the year (14 hours and seven minutes). The winter solstice is the moment when the Earth’s orbital motion points the Earth’s South Pole most closely in the direction of the sun. This occurs at 8:28 a.m. on Dec. 21. Earth’s axis of rotation is tilted 23-and-a-half degrees to the plane of Earth’s orbit, and the tilt is the cause of the seasons. From the northern hemisphere on the winter solstice, the sun’s daily path follows its shortest and lowest arc across the sky for the year. Winter ends at the spring equinox on March 20.

On Dec. 24, 1968, astronauts on the space mission took an iconic photo of the Earth rising over the moon’s surface. The Apollo 8 mission also set the stage for the first moon landing in July, 1969.

All of the events are free and open to the public. The Apollo 8 presentation will also be streamed live on Griffith Observatory TV and can be viewed by visiting livestream.com/griffithobservatorytv.

The Griffith Observatory is located at 2800 E. Observatory Road. For information, visit griffithobservatory.org.