At 92 years old, Fairfax District resident George Epstein is more active than people a fraction of his age. With frequent trips to the Freda Mohr Multipurpose Senior Center, organizing town hall meetings, writing for gaming magazines and websites, organizing annual scholarships at Fairfax High School and staying busy with his daughter Sue, it’s a wonder the nonagenarian has time for anything else. 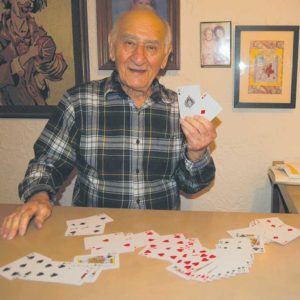 Fairfax District resident George Epstein said the game of poker stimulates the brain, which may help stave off dementia. (photo by Edwin Folven)

Epstein said remaining active is his secret to longevity, and that applies to the body and mind. The retired aerospace engineer added that one secret is the game of poker, which he plays up to three times a week at a Los Angeles-area casino. The game includes planning, strategy and decision making that keeps the brain stimulated, which Epstein believes may help stave off Alzheimer’s disease and dementia. He has written three books on poker and is a columnist for Gaming Today and cardplayerlifestyle.com.

“It’s great mental challenge. When you exercise your muscles, they get stronger. It’s the same for you brain. It gets stronger and healthier,” said Epstein, who also organized a seniors poker group at the Claude Pepper Senior Center on La Cienega Boulevard that grew to 200 people. “I notice people who played didn’t come down with Alzheimer’s that we knew of. It seems there is a real benefit to it.”

It makes sense that Epstein would discover such a secret, as finding ways to improve the world has been a foundation in his life. Innovations he created during his career in the aerospace industry were critical to the launch and operation of satellites and spacecraft.

Epstein was born in Boston and after serving in the U.S. Navy during World War II, attended engineering graduate school at MIT. In the early 1950s, he moved to Los Angeles and took a job with North American Aviation. He specialized in adhesives that joined pieces of aircraft and spacecraft together, as well as honeycomb composite structures, which are little building blocks combined to create a lightweight outer structure for satellites and spacecraft. His technology was used in the Titan and Polaris rocket programs and still has civilian and military applications today.

Epstein helped create lightweight but durable components for military helicopter fuselages so pilots would be better protected from ground-based gunfire. He also helped develop pressure vessels, which are components of satellites that fire compressed air to put them into the correct positions in orbit. Epstein has received numerous awards from NASA, the Air Force and many aerospace organizations. He formerly taught a class on his adhesives technology at UCLA. 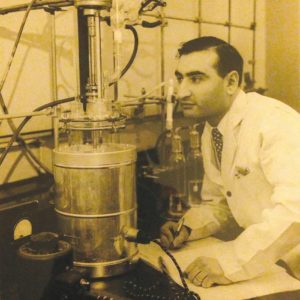 George Epstein, shown in the 1950s, was an aerospace engineer who helped develop adhesives and building materials used in satellites and spacecraft. (photo courtesy of Sue Epstein)

After a career in which he also worked for Ford Aeroneutronics and the Aerospace Corporation, Epstein retired in 1991 at age 65, but was determined not to fade into the sunset.

“I didn’t want to become a couch potato,” he said. “I wanted to continue to be active and continued to work as a consultant. I remained active with the Society for the Advancement of Material and Process Engineering (commonly known as SAMPE).”

It was with SAMPE that Epstein made his mark in the Fairfax District, where he has lived for decades, first on Fairfax Avenue and currently on Detroit Street. After the sudden death of his wife Irene in 1996, members of SAMPE asked if they could do something special, as Epstein’s wife was a frequent and well-liked visitor at their meetings. He asked that they start a scholarship in her name at Fairfax High School, from which their daughter Sue was a graduate. The scholarships are still given annually to students planning to study for careers in the engineering or medical fields. They have grown from $500 for a single student the first year to $2,000 each for up to six students.

“They have been going strong for 22 years,” Epstein said. “One of the things I like about it is the diversity of the students who receive the scholarships. Every race, country and religion are represented in the boys and girls.”

Epstein said he is also proud of his work at the Freda Mohr Center, where he has helped organize town hall meetings for seniors, and a current events social group. Speakers have included Los Angeles City Attorney Mike Feuer, City Councilman Paul Koretz and Los Angeles Controller Ron Galperin. He joked that Galperin’s visit was very lively, as he is a former cantor and there was singing and dancing.

Epstein also said he still loves his neighborhood because it feels like home. He recalled a time when the red car trolleys ran through the area and remembered when the Fairfax District was the heart of Los Angeles’ Jewish community. He said despite the area becoming busier with more density, there is still no place he’d rather live.

“I am so fortunate. I have the most remarkable daughter and I’m so lucky. My goal is to make it to 122,” Epstein said. “Time is precious. Make the most of it. Always use it the best you can.”

Remains identified as Nancy Paulikas, who went missing in 2016