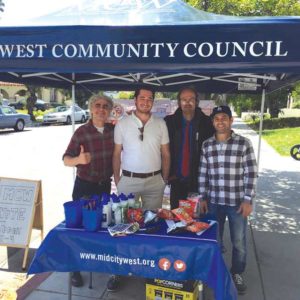 “People are becoming more empowered and outspoken about politics,” said Anastasia Mann, president of the Hollywood Hills West Neighborhood Council. “The best way to do something about it all is through the neighborhood councils.”

The councils, comprised of volunteer, unpaid elected officials, serve an advisory role on behalf of their neighborhoods regarding land use, homelessness and emergency preparedness, among other matters. Interested stakeholders have until Jan. 15 to register with the Los Angeles city clerk as a candidate for the races in the Hollywood and Wilshire areas.

The neighborhood councils in the Olympic Park, Koreatown, Westlake and MacArthur Park areas follow in the cycle of elections, with their candidate filing periods opening today for their elections on April 4.

While the councils have seen residents growing more involved with the neighborhoods in the last few years, current board members hope to attract even more participation this election cycle, whether that’s getting at least two candidates vying for every seat or increasing voter turnout.

“Being on a neighborhood council really allows you to get your hands right into what makes this city tick [and get] up close and personal helping your stakeholders in person every single day,” said Max Kirkham, secretary and elections chair for the Greater Wilshire board. “Being on the Greater Wilshire Neighborhood Council has been one of the greatest experiences of my life [and] I was first elected with very little experience or knowledge of what I was even doing, other than a desire to get more involved in my community in a substantial way.”

George Skarpelos, president of the Hollywood United Neighborhood Council added that the councils can address hyper local matters and create a “better line of communication” to the Los Angeles City Council.

While most neighborhood councils on average serve approximately 40,000 people, each board’s election only draws several hundred voters, if not fewer, according to the councils. Social media postings, flyers at schools and bus bench signs are a few of the ways the Hollywood-area councils hope to raise community participation levels.

“Democracy only works when the people being governed vote,” added Damien Burke, chair of the Hollywood Studio District Neighborhood Council.

The city’s Department of Neighborhood Empowerment, which oversees the councils, will also encourage greater turnout by offering outreach workshops for current council board members and by partnering with local nonprofits and businesses, according to Thomas Soong, the department’s director of outreach and communications.

To be both a candidate and to vote in the neighborhood council elections, individuals must prove they live, work or own property in the area, or that they have a significant stake in the neighborhood as a community-interest stakeholder. The criteria for who is a community-interest stakeholder has been in contention however, after Councilman David Ryu, 4th District, put forward recommendations during a Health, Education and Neighborhood Councils Committee meeting on Dec. 11 to more narrowly define the term.

The change will not go into effect until it has been approved by the full City Council, which is on recess until Jan. 11. Until then, the situation of who can run and vote in the council elections remains “evolving,” according to Mark Pampanin, communications deputy for Ryu.

“We hope to resolve any issues in order to implement this change in time for neighborhood council election voting next year,” he added.

In the meantime, the neighborhood councils continue to prepare for their election cycles, including Mid City West Community Council, which will begin its candidate filing period for the board’s 35 seats on Feb. 17 ahead of its election on June 2.

Between now and then, Scott Epstein, chair of Mid City West, will be encouraging more community residents to run for office. He said he sees every event that the council holds, whether its board meetings or the council’s annual homeless count, as a way to recruit new people for the council.

“Turnout has increased in the last few cycles, but we have room for growth,” Epstein said. “We’re at a time when folks are really politically engaged for good reasons … and it’s really empowering to make change at the local level.”

‘Spider-Man: Into the Spider-Verse’ is the superhero film we deserve now and forever