Most of Cherokee Avenue trees spared the ax

Fourteen of 18 full-grown ficus trees scheduled to be cut down in the 1200 block of North Cherokee Avenue will be spared after the city’s Bureau of Street Services came up with a plan to keep them in place. 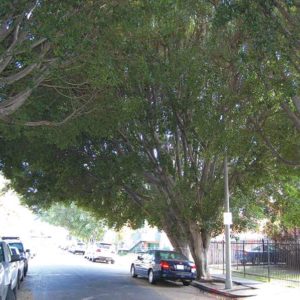 The mature ficus trees in the 1200 block of North Cherokee Avenue have formed a shady canopy above the street. (photo by Edwin Folven)

The city announced plans last April to cut down the 18 ficus trees because their roots had damaged adjacent sidewalks, which need to be replaced to meet Americans With Disabilities Act requirements. After tree advocates cried foul, Councilman David Ryu, 4th District, asked the Bureau of Street Services to take a second look. A new review last spring resulted in the same determination that all 18 trees had to be removed.

The nonprofit United Neighborhoods of Los Angeles filed a civil lawsuit against the city challenging its Sidewalk Repair Program, with a component of the lawsuit seeking to save the Cherokee Avenue trees. After months of legal wrangling and a further request by Ryu to incoming Bureau of Street Services General Manager Adel H. Hagekhalil to again look for ways to spare the trees, a plan was announced in which only four will be cut down.

The plan was outlined in a report to Ryu’s office released last week. The council’s Public Works Committee must still review the plan and submit it to the full council for approval, which will likely occur after the first of the year. However, Ryu remains optimistic it will be approved and the trees will remain.

“When I was first told that all 18 of these beautiful, mature trees had to be removed to fix the broken sidewalks on Cherokee Avenue, I thought there must be a better way,” Ryu said. “We cannot pit sidewalk repair against protecting our urban canopy. This report makes clear we can do both.”

The trees are located along a one-block stretch between Fountain and Lexington avenues. The city plans to use a combination of tree trimming and root pruning, as well as a reduction in the width of new sidewalks in some places, to preserve the trees. The sidewalks, which would be three- to four-feet wide, would be ADA compliant. The plan outlined in the city report also states that crews will first remove the sidewalks next to the four trees to be removed to evaluate their roots and determine if they too can be saved.

Some of the ficus trees have been in place for 80 years. The foliage of trees on both sides of the street have grown together, forming a shady canopy.

The city has not outlined why the new approach wasn’t considered before. Ryu called it a creative solution. Hagekhalil said the plan is part of the city’s commitment to better protect the urban forest.

“The Bureau of Street Services, along with our partners at the Bureau of Engineering, are committed to maintaining our existing street trees and planting more to increase our urban tree canopy and enhance the quality of life in our communities,” Hagekhalil said. “Saving the 14 trees on Cherokee Avenue demonstrates how we can balance providing safe and accessible sidewalks with preserving our precious healthy trees.”

Los Angeles has the largest urban forest in the country.

“I am so grateful to the Bureau of Street Services and General Manager Adel Hagekhalil for working with me to find a creative solution that fixes our sidewalk, allows for street parking and saves as many trees as possible,” Ryu added. “These are the kinds of things our city can achieve when we aim high, put our heads together and prioritize our communities’ quality of life.”

Casey Maddren, president of United Neighborhoods of Los Angeles, was elated that at least 14 of the ficus trees will remain.

“We are definitely very happy about it and definitely grateful to Council Member Ryu,” Maddren said. “We are still very concerned about future tree removal orders under the sidewalk repair program, though. We will definitely closely watch how these tree removals are expanded in the future. As for the Cherokee trees, I don’t believe we will take any further action.”

Use of WeHo for West Hollywood raises concern